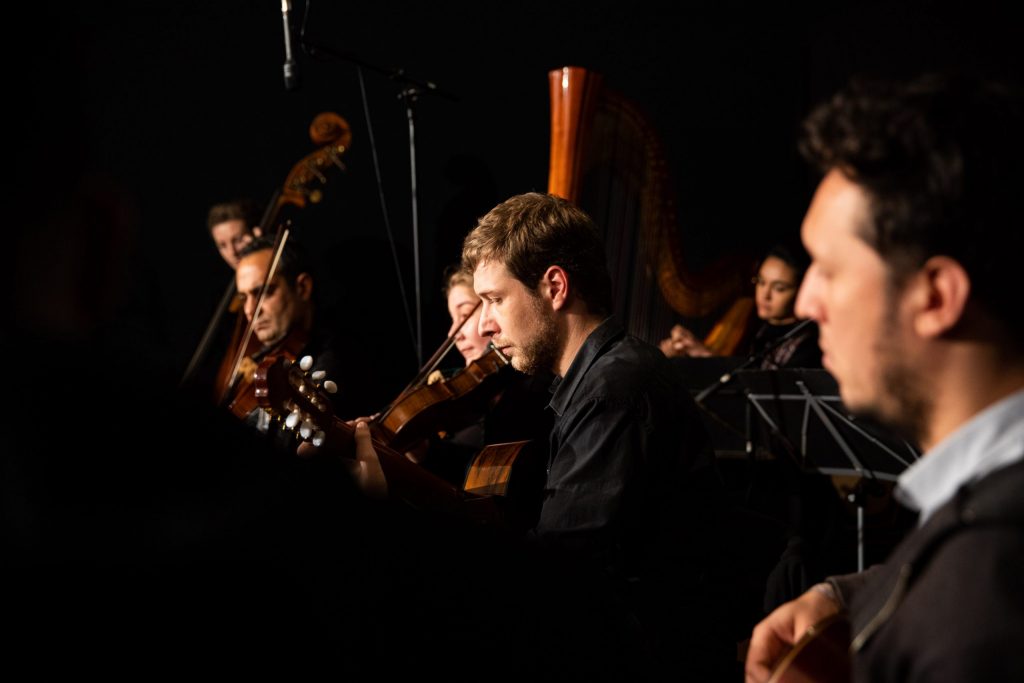 Bridges brings together musicians with and without migration or refugee background to perform music in public. More than 130 music enthusiasts from 25 countries have already created various ensembles and performed more than 230 concerts. The award-receiving Bridges Chamber Orchestra will now become a permanent institution. It consists of one-third locals, one-third migrants, and one-third refugees who all pursue one common goal: They want to become the German orchestra to reflect Germany in its diversity and cultural richness.

“The Bridges Chamber Orchestra as a “democratic orchestra” featuring outstanding musicians is nearly a symbol for how social coexistence is possible and thus bears tremendous potential for serving a role model function: The orchestra uses differences to create a common sound, a mutual experience for the beauty of music. It’s what we would like to see in a successful society”, says the jury.

Fear No Danger is the name of the opening concert played by Bridges Chamber Orchestra with conductor Eva Pons, celebrating its premiere tonight at the Haus der Kulturen in Mainz. Under the title Fear No Danger, the orchestra will be performing pieces that reveal music as a migrant who has transcended geographical boundaries through the ages, fearlessly advancing and artistically absorbing the influences of other musical styles.

The concert hall is filled with excitement even before the performance. 22 musicians from all sorts of origins bustle about on stage, tinkering on their instruments here and there, writing down notes. Chairs are pushed into position, spotlights are set. They are chatting in German, Persian, English, Arabic… the atmosphere is colorful, festive, and exciting. The people gathered here find joy in making music together. And today is the first time they are taking the stage together as the Bridges Chamber Orchestra in order to celebrate the premiere of Fear No Danger in this constellation. 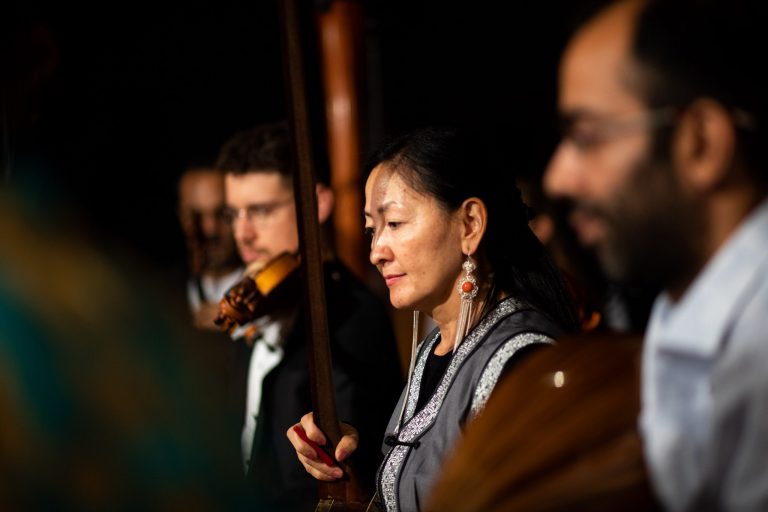 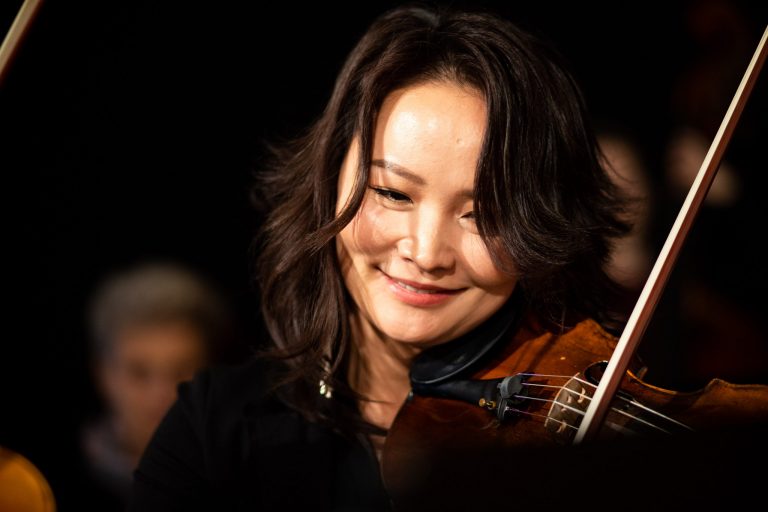 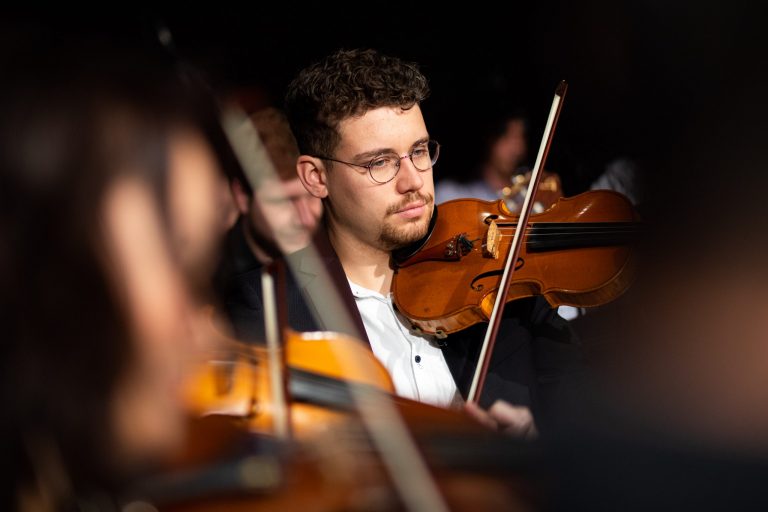 Among them are Johanna-Leonore Dahlhoff and Anke Karen Meyer. They are the Executive Directors of the Bridges – Music unites initiative. Since 2016, Bridges has been bringing together musicians with and without an immigrant and refugee background to perform music together. They started with around 60 members. Today, they have more than 130 musicians from 25 countries forming one large orchestra, many small ensembles, and as of recently also a chamber orchestra.

Johanna-Leonore Dahlhoff, who herself is playing flute this evening, is also the Artistic Director of Bridges – Music unites: “Right from the start, Bridges wanted to reach refugees who are professional musicians. There are plenty of low-quality music projects out there. We wanted professionalism from the start.” They succeeded. Bridges has now had around 230 performances, from the opera house in Frankfurt and the federal government in Berlin to music festivals in Italy and Uzbekistan. They are ambitious, motivated, and dedicated. They are all working toward the same goal: They want to become THE German orchestra to mirror Germany in its diversity and cultural richness. 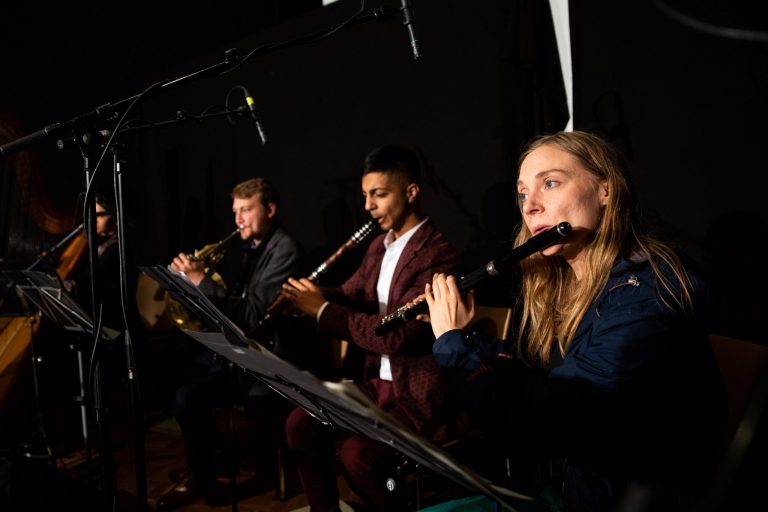 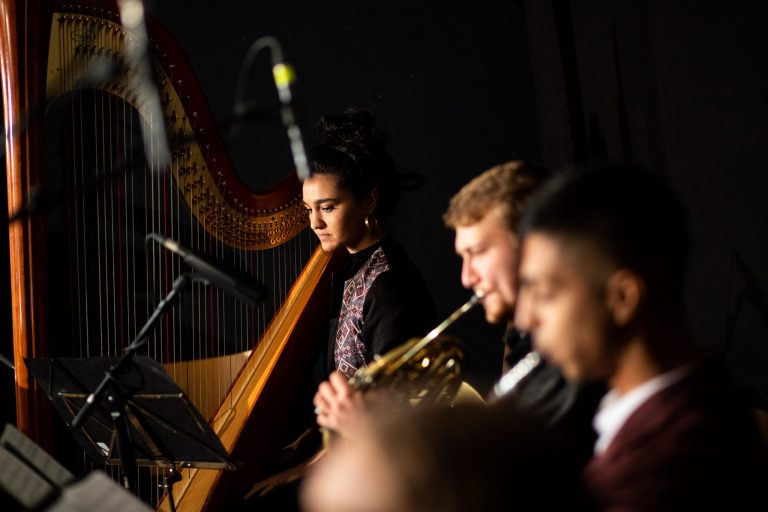 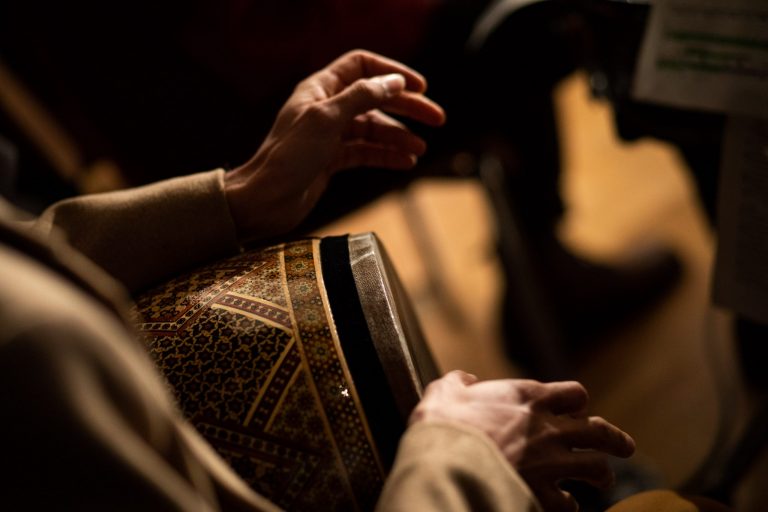 Just by glancing at the small program, one immediately recognizes the cultural diversity of this orchestra. Walid Khatba is playing violin next to Enkhtuya Jambaldorj on the shudraga and Eleanna Pitsikaki on the qanun. How is it possible for Arab, Persian, Mongolian, and Western instruments to merge? “That is the big challenge, of course,” explains Johanna-Leonore Dahlhoff, “naturally, we don’t understand each other through music right away. Europeans for example, don’t have the aptitude to understand Persian music, because music in Europe only uses the notes that can be found in black and white piano keys. Persian music, however, has additional tones exactly in the middle between our notes sounding wrong to our ears. This is where we need bridges. But in order to build them, both sides first of all have to be willing to work together.”

Working together, getting closer to one another, accepting natural differences, belonging –  no matter what language you speak, where you come from, how you look. All of that works at Bridges – Music unites, for they have built their bridge, and it has led them to more knowledge and understanding.

“With us, integration moves forward on multiple levels,” says Anke Karen Meyer, Bridges’ Culture Manager. “On the labor market, between musicians on stage, in pedagogical formats in schools, workshops, etc. For example, we successfully supported one of our musicians in preparing for the entrance examination at the Pop Music Academy. He got offered a place there now. We’ve arranged an apprenticeship for an Iranian musician, as well as an apartment for another family.” 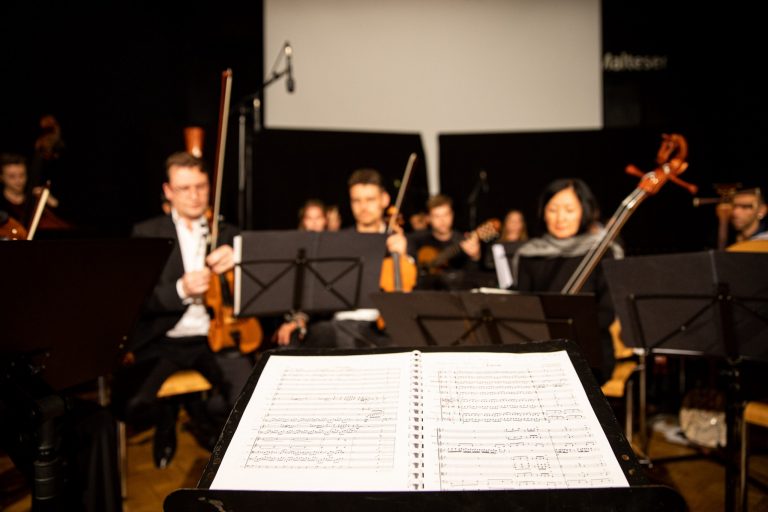 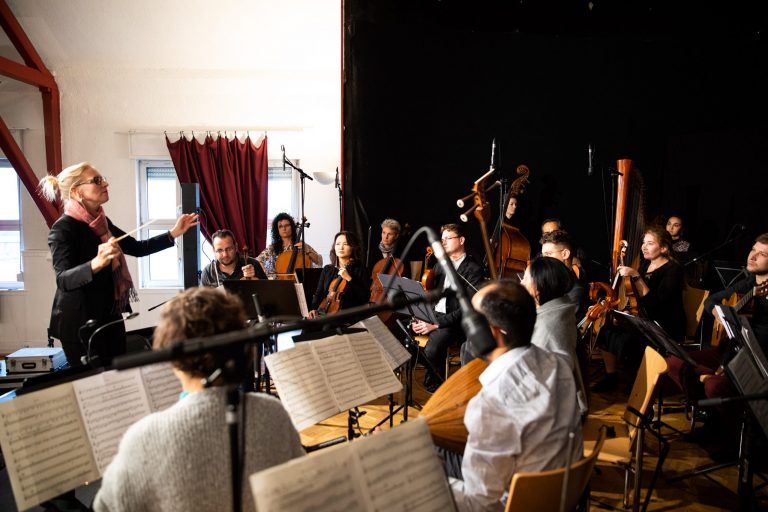 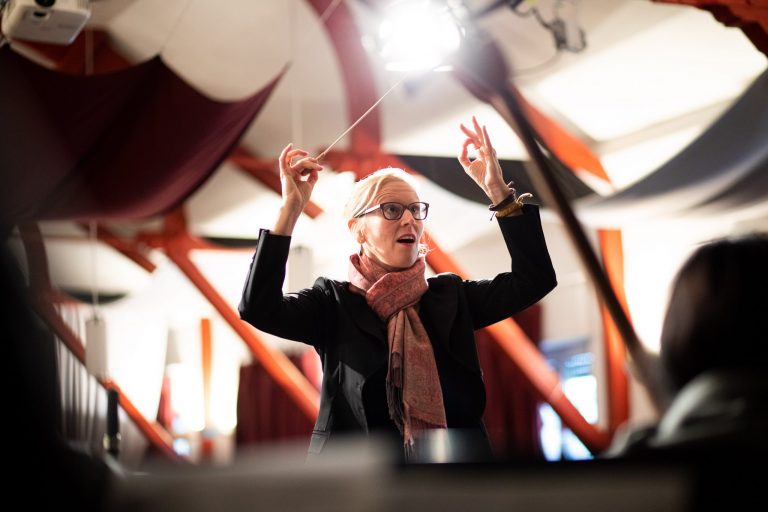 “Things only advance when there is an influence from someplace else,” explains Johanna-Leonore Dahlhoff. “You can clearly see that in music. When slaves were shipped to America, they sang their songs there and blues and jazz were created. In Spain, Arab music mixed with the local culture and Flamenco was created. It is through something different from the outside that new creations are made, and that is what is so exciting. This isn’t working despite our differences, but rather because of them.” 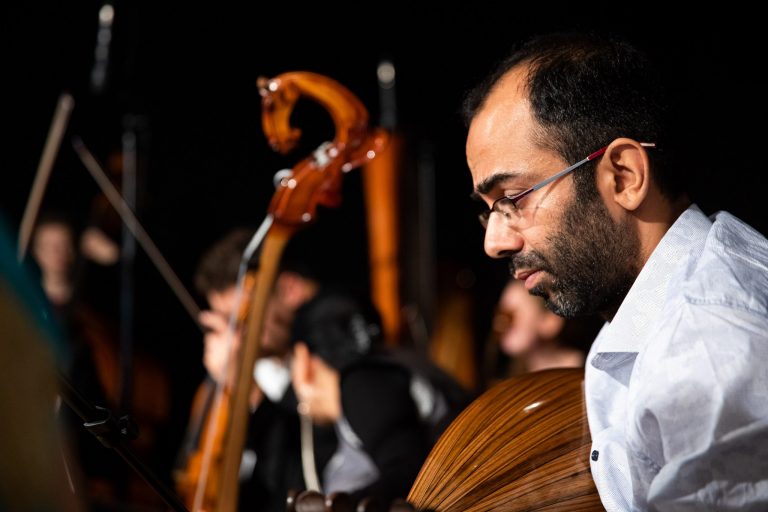 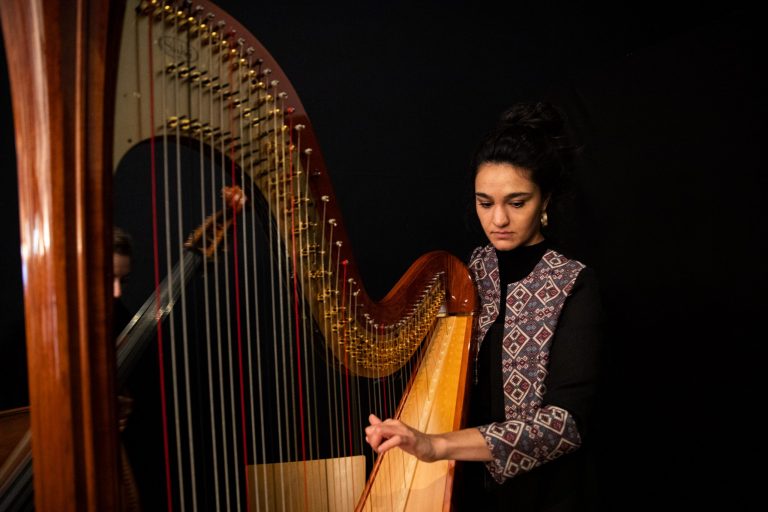 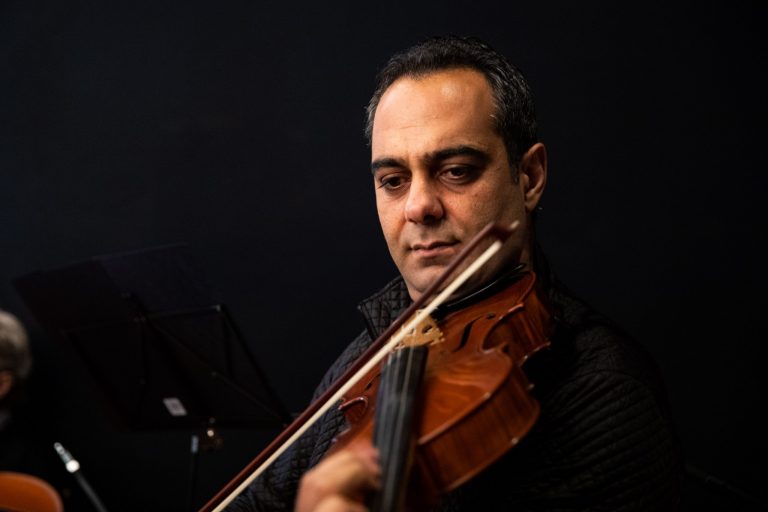