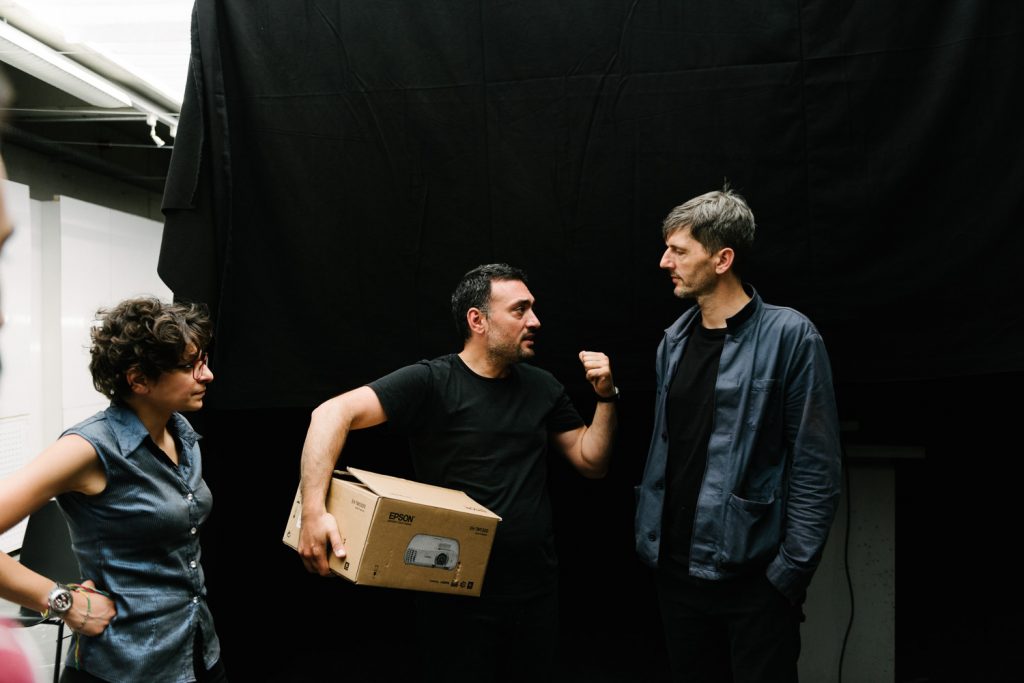 *foundationClass offers refugees who have either already been artistically active in their home country or are now planning to become so in Germany the opportunity to prepare for applying to study at an art academy. A team of artists, some of whom have experienced as refugees themselves, extends support to 20 participants in finding their artistic positioning as well as work methods aligned with their own abilities and talents in order to create a strong portfolio for applying to a higher institution for art or design in Germany.

“This institution is a gigantic room for potential.” Ulf Aminde, an artist and professor, is sitting in the garden of the Weissensee art academy in the far north of Berlin. Between the individual buildings, students are seen hurrying about; a circular saw gives a howl time and again; transporters enter the yard at one-minute intervals, unloading materials. Two days from now, the tour of the academy will be held, an annual show at which all artists of the academy exhibit their works. Now, shortly before that event, there is a general air of hustle and bustle that is rare for the campus.

Aminde’s wish is for more of this type of bustle, and for the whole year if possible. And he has brought into being a project that in the long term might contribute to making art schools even more exciting places than they are anyway: the *foundationClass offers refugees who were active artists in their home countries, or now want to become artists in Germany, an opportunity to prepare themselves for applying for admission to art school. 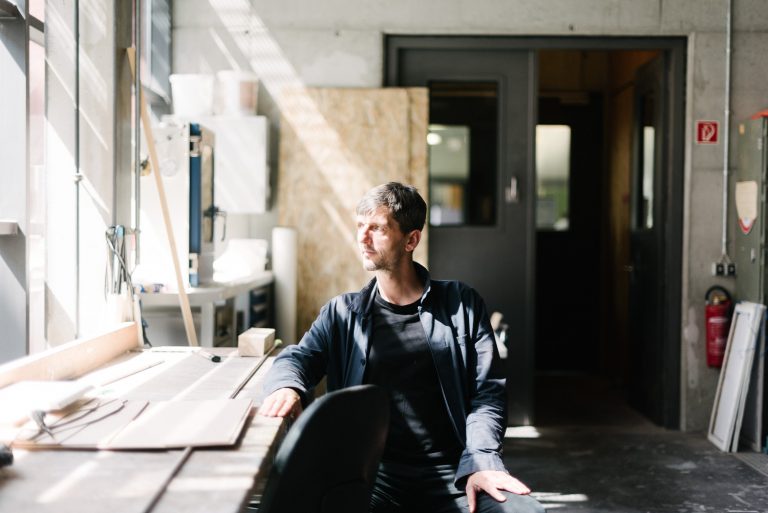 “We need to focus on artistic quality.”

A team made up of male and female artists – some of them with their own refuge story – will be providing support to the 20 participants when it comes to taking a stand as an artist, developing an attitude, and finding formats and methods being in accordance with everyone’s capabilities and talents. The application files that will ultimately be created should not only carry a clear trademark but should also be convincing in terms of quality. Ulf Aminde, who as a professor at Weissensee is involved himself with the acceptance process for art students, is also certain of this: “The process of selecting applicants is irrational. Therefore, we need to focus on artistic quality.”

This appears to be working amazingly well. Last year, almost all of them found a college place – many of them in Berlin but some at the art schools in Düsseldorf, Leipzig, and Saarbrücken as well. To achieve this, the team needs to make a permanent effort to find individual solutions for each refugee, including work at the bureaucratic level. In this context, Aminde speaks of “creative administration” to counter the German ‘battle of forms’ that is so deeply uncreative and intricate. 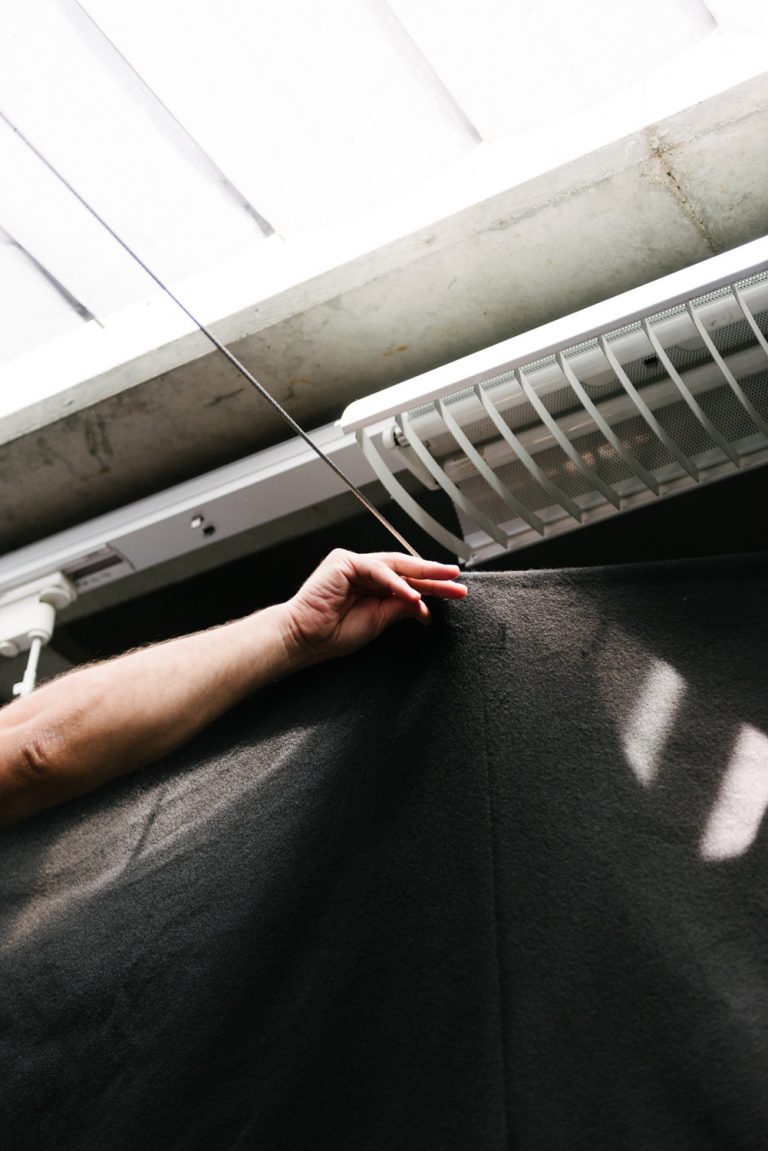 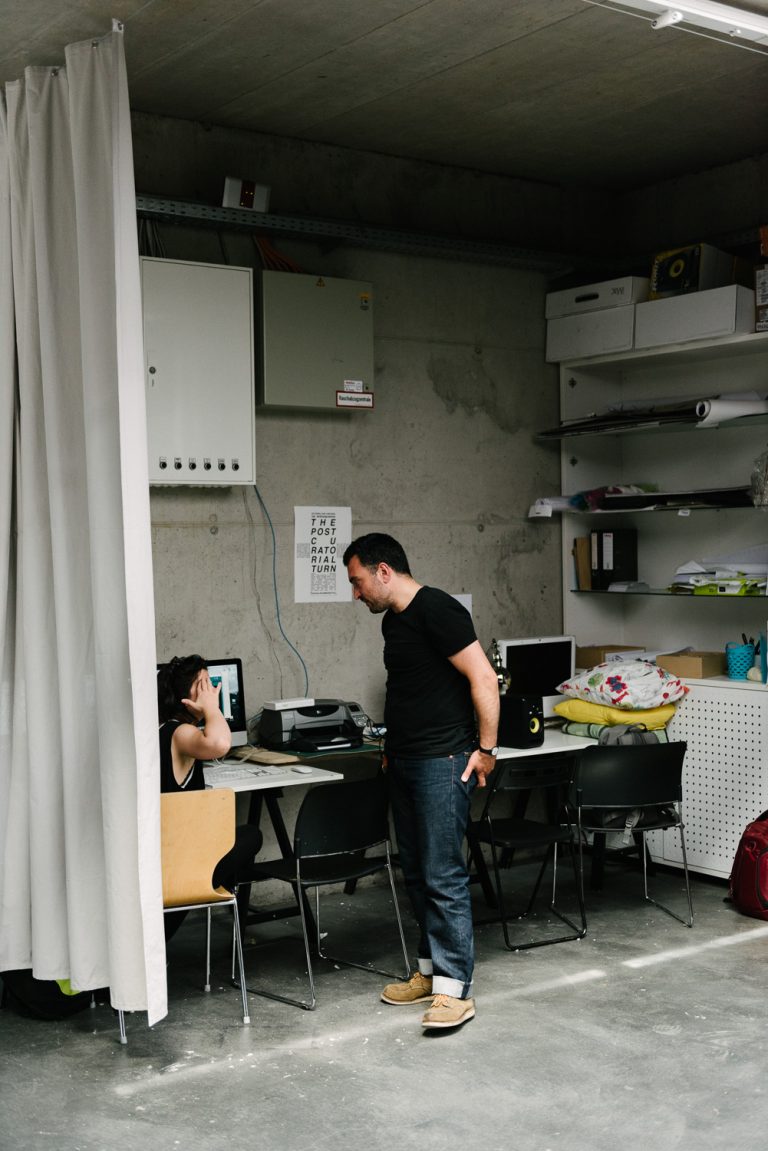 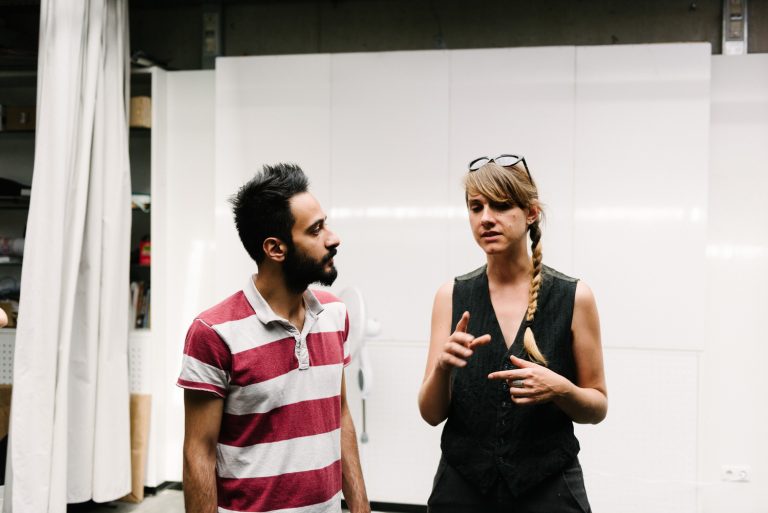 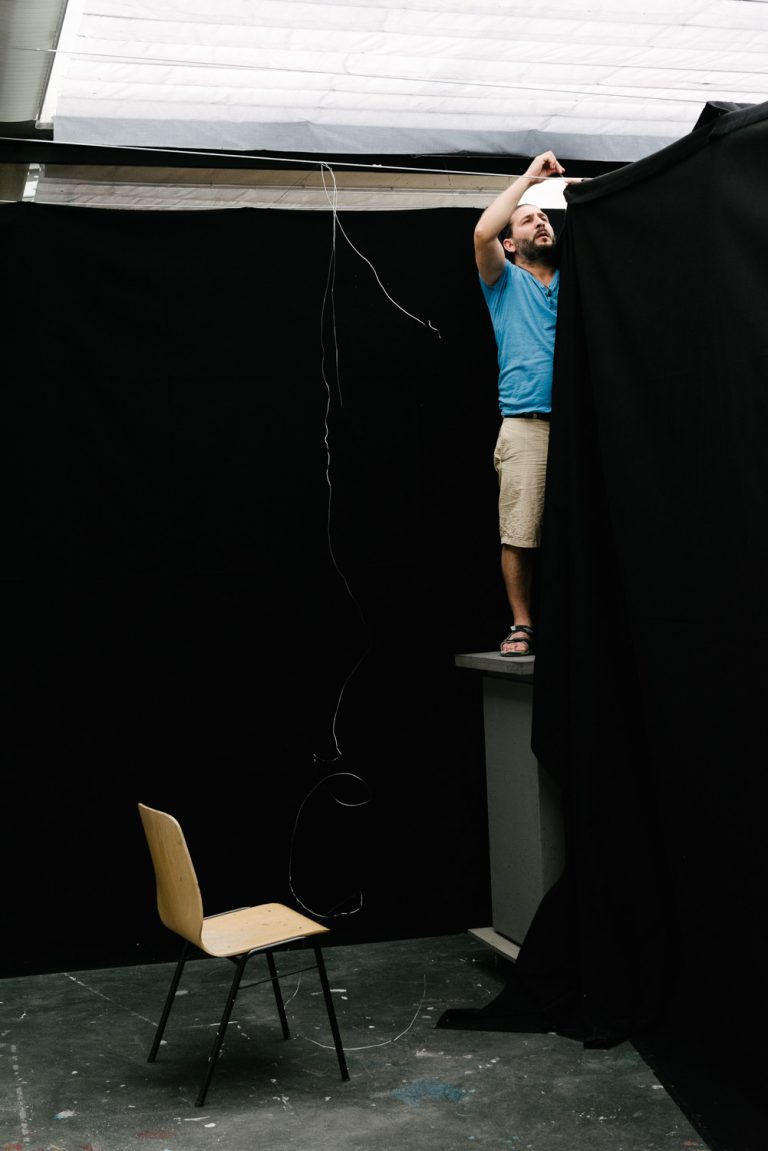 Video art rather than painting

Anwar Al Atrash and Fadi Aljabour come from Syria, and have both been active as artists for more than ten years. Now they are part of the *foundationClass. “It is important to us not to be perceived as refugees but rather as artists. The *foundationClass is a place where precisely that is happening”, says Al Atrash. “You’re not going to get pushed into a corner, neither because of your origins nor for your decision on how you want to work. We are free to try ourselves.”

Whilst their focus to date has been on painting, Anwar Al Atrash and Fadi Aljabour are going to deal increasingly with video art in the future. So, it comes as no surprise that the entire class is realizing a lavish video installation for the tour of the art academy, under the direction of Ali Kaaf. A section of a room in the new building that has now been made available permanently to the *foundationClass will be darkened for that purpose. 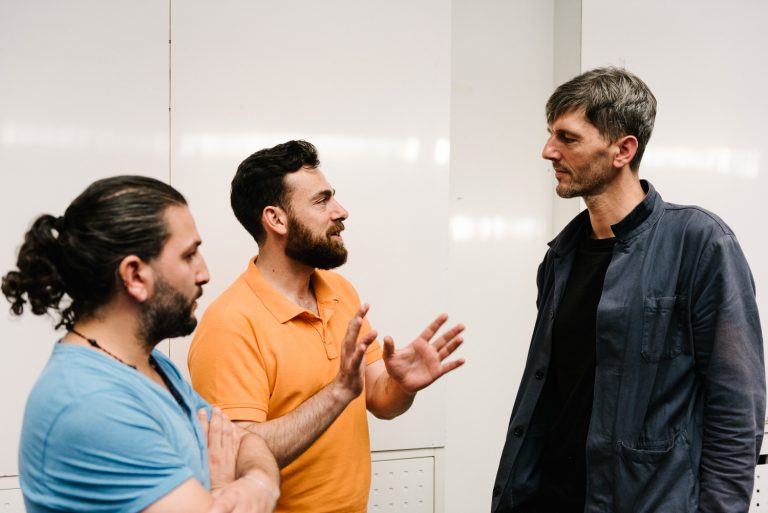 “The sphere of art shows the least solidarity of all spheres you could think of.”

To be able to realize transdisciplinary projects such as the video installation for the tour, participants in the *foundationClass initially studied the most varied and diverse artistic foundations and methods, form painting via photography up to time-based media art. Subsequently, they began developing their highly differentiated portfolios. During that entire period, they utilized the structural advantages offered by the college: workshops, canteen, rooms of their own.

“This institution offers incredible amounts of structure, potential, and resources we can use”, says Ulf Aminde, who does see more in this relationship which is so one-sided at first glance: “Our aim is to initiate a change of perspective at the college, and in our work as artists. We want participants to use the project for themselves, but we are using the project in turn to change the college.”

Then what should those changes look like in practice? The clear result is: positions of feminism and those that question the colonial canon are to be included increasingly. “The sphere of art shows the least solidarity of all spheres you could think of”, says Aminde, who does not want an opening toward such positions to be confused with becoming soft: “This is not about blurring categories and becoming more human but rather about admitting different narratives.”

Miriam Schickler, who at the *foundationClass is in charge of coordination, deals intensively with feminist and post-colonial questions. She says: “We’re not only offering access to higher education but we’re also questioning the system: Who are the people studying here? What is being studied, and who is teaching it? On all these levels, we’re working to develop an up-to-date idea leaving more room to positions that have hardly been present to this date.” 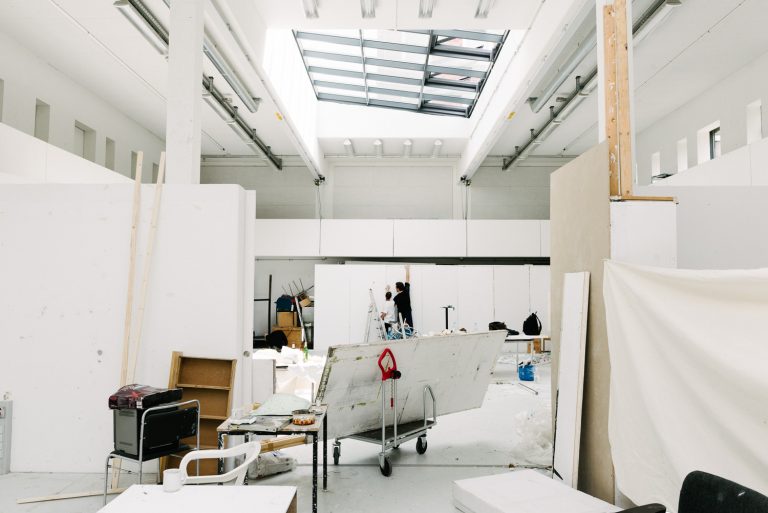 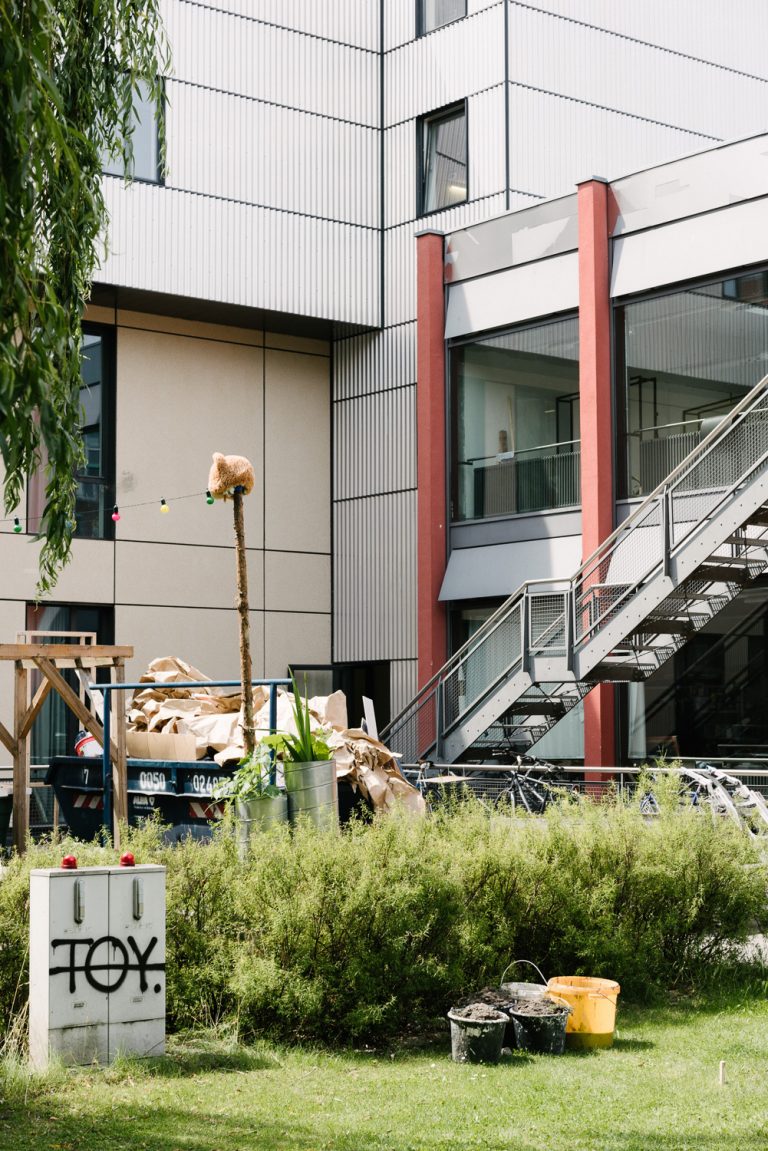 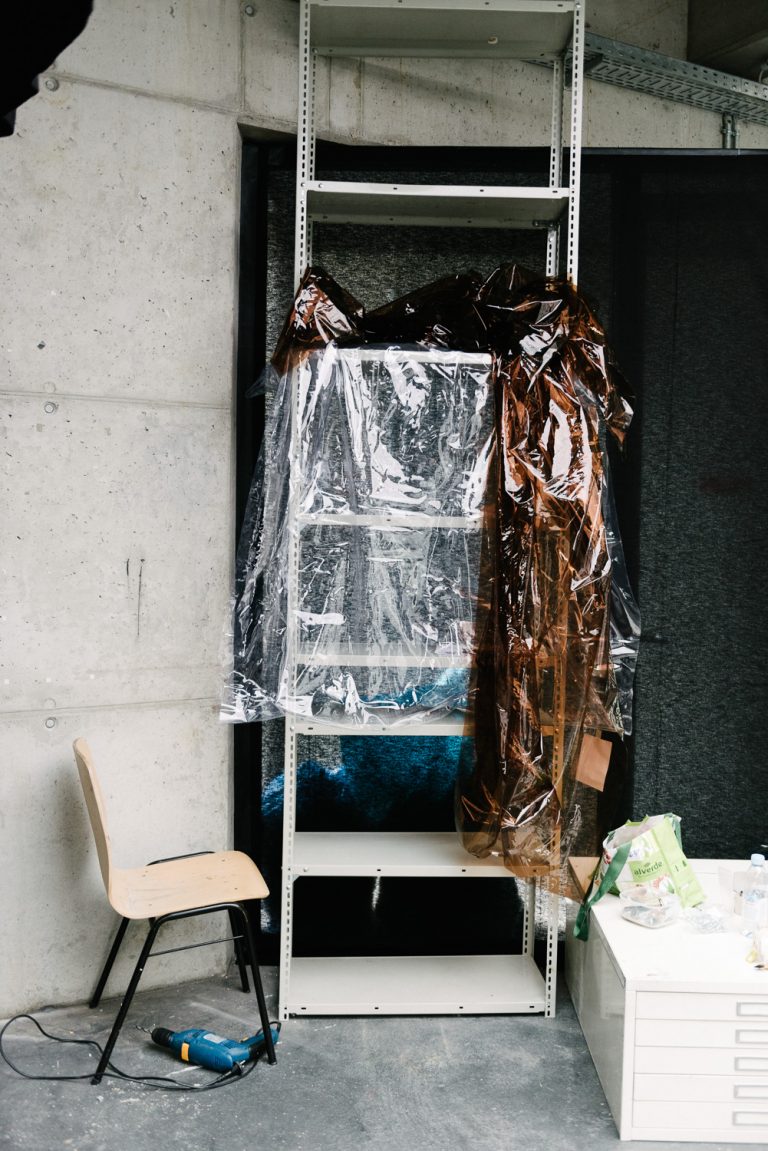 A family for the time being

Before the current participants send their application portfolios to art schools across Germany, the class will be cooperating this autumn with the Maxim Gorki Theater in Berlin. But some day soon, there comes the moment when Ulf Aminde and his team will have to let go of the artists with whom they had exchanged views and experiences for one year.

“I wish I had more time. My dream would be to work for five years with the same group of participants”, says Aminde, almost sounding a bit melancholic. Not only for him, but especially and primarily for the participants, the class was like a family: every day, the team works jointly in the small room at the art school; they have their meals together, and write to one another at night on Facebook.

That after each year, there will be new, young, and ambitious artists forming the next generation is not only part of the concept but also proof that the system works. 95% of all participants of the first year are art-school students today. Even so, they still pay regular visits to the *foundationClass. Aminde says: “There are times when we have almost too many visitors.”