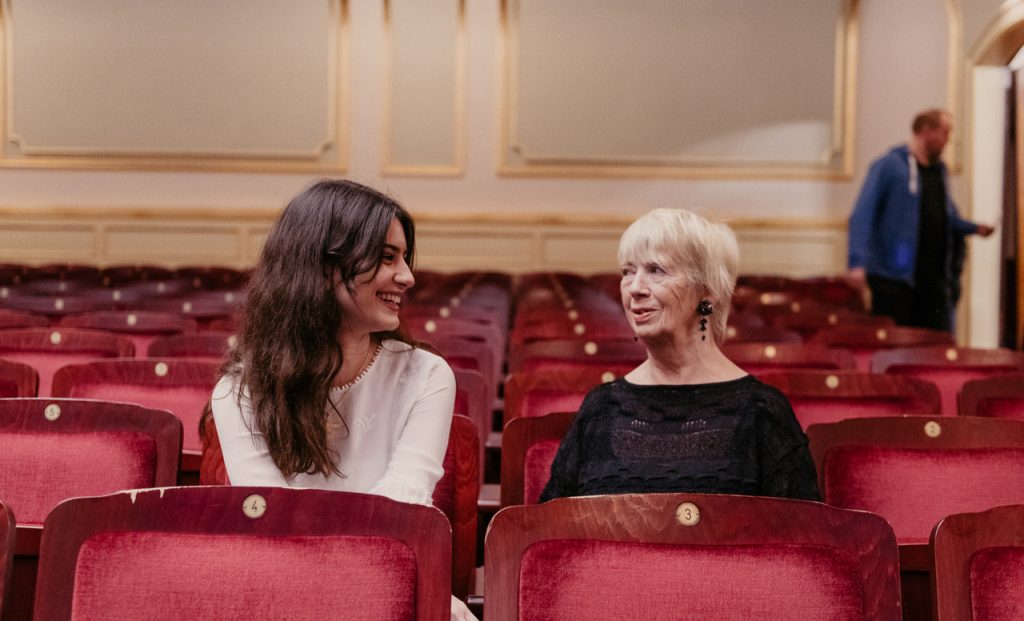 This initiative creates tandems between senior citizens and secondary school students in upper classes, who then attend cultural events together, such as exhibitions, theater, and opera. It uses the connecting power of art and culture to initiate contact among people of different backgrounds, generations, and cultures, and to foster solidarity in Hamburg’s neighborhoods. The award is designated for enabling the project to scale to additional districts and cities.

“This initiative facilitates low-threshold access to culture and promotes intergenerational encounters. Free from moral judgement, participants are picked up from their often isolated and lonely day-to-day lives while teenagers are encouraged to actively contribute to the shaping of our society”, says the jury.

On a Monday evening in October, there is a very special meeting on the agenda:  A senior citizen and a secondary school student, Jutta Conrad and Prochista Sarshar, have a date to see a concert given by Swedish singer José González at Hamburg’s performance venue Laeiszhalle. Conrad is 70-something, “I cannot reveal any more than that,” she quips. What connects them: a love for culture and an interest for the other respective generation.

Both are participants in the project KulturistenHoch2, an initiative that enables a growing number of retirees with limited financial and physicial means to attend a cultural event with the assistance and company of a secondary school student. The principle is simple: Some 100 cultural organizers all over Hamburg provide tickets for events, including concerts, museums, theater, readings, and operas. The older participants who register are contacted and receive an invitation, while the students are notified there is an elderly person from their neighborhood would like to attend an event. Those who have the time and the inclination to join can obtain contact info from KulturistenHoch2. Then, a date is set and they attend the cultural event together. 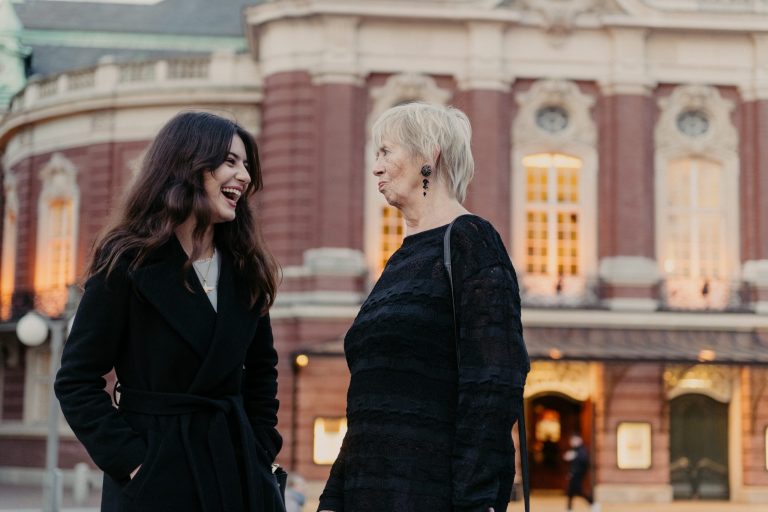 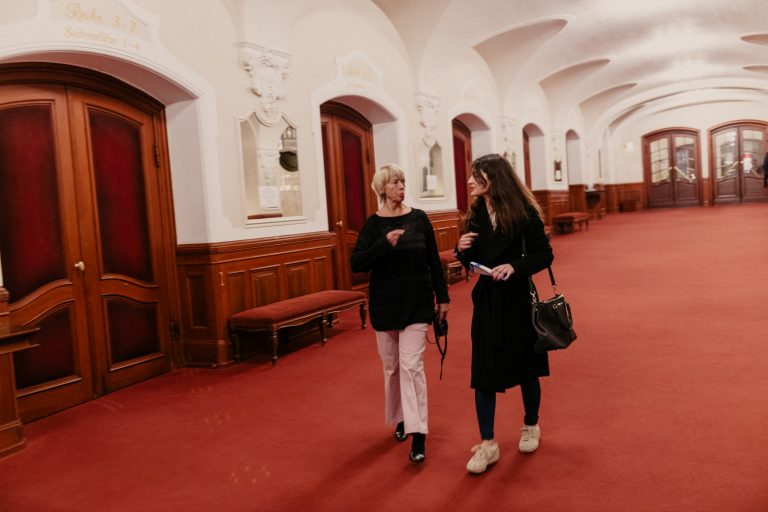 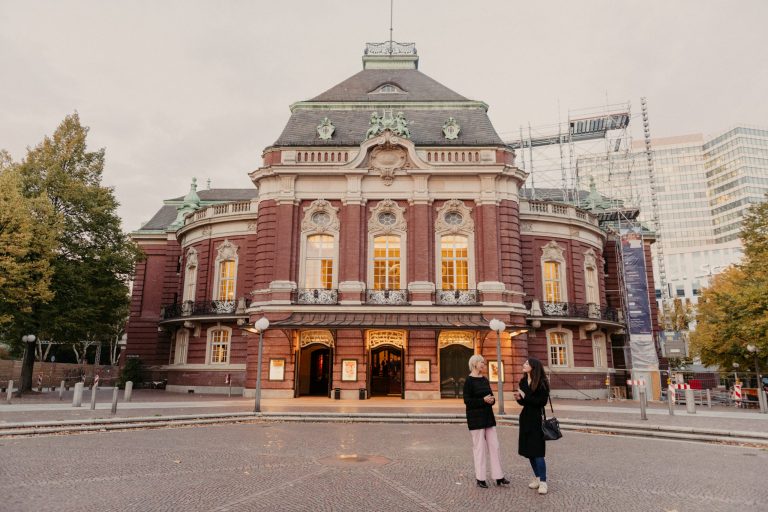 Currently, there are nearly 150 elderly people registered, representing 20 neighborhoods. Senior citizens must fulfill three criteria to participate: they should be residents of Hamburg, be over the age of 63 and have access to no more than 1,000 euros net income per month. Simultaneously, there are around 150 students, 50% of whom have an immigration background, representing 9 participating schools in 27 Hamburg districts.

Tonight, is not the first time that Jutta Conrad and Prochista Sarshar are participating in one of the cross-generational cultural experiences. Both have attended KulturistenHoch2 events several times. Jutta Conrad learned about the program from a blackboard on her residential block. Prochista Sarschar came to KulturistenHoch2 through her school. The student dreams of becoming a neuro or cardio surgeon, “I’d like to have a connection to other people, I like to help others.” For her, it is the contact with older people that is in the foreground. She views her social engagement as being good preparation for her professional aspiration. “It’s enriching to be in contact with people who are interested in culture, but actually can’t afford it. Some of them are lonely and don’t have anyone. It’s nice to go out with them and spend a pleasant evening.” 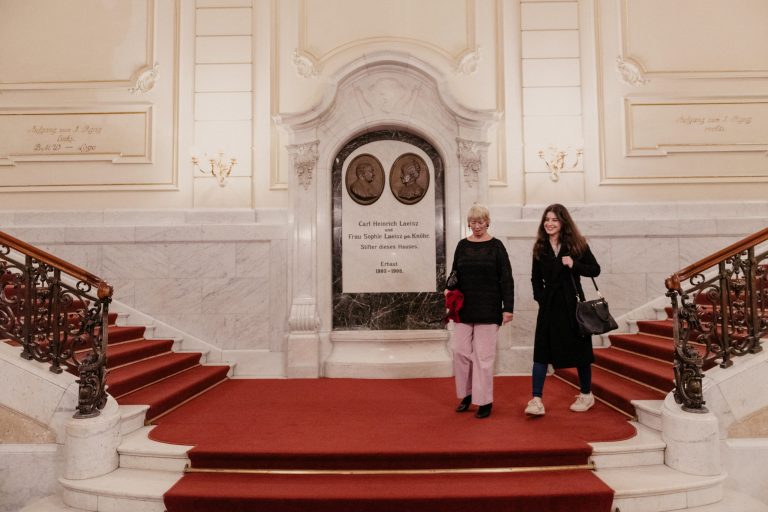 Costs for public transport, wardrobe, and a refreshment during the break will be covered for the evening. Elderly people who have physical constraints or are unable to walk are picked up by their younger companion. Julia Conrad explains that many tenants in her residential block are reliant on a walker or a wheel chair, “They are afraid to go out someplace on their own. The pick-up service is really great for them.”

“Suddenly you realize how older people feel in situations that may appear really easy to us.”

In order for the students to be well prepared for the joint excursion, they participate in workshops prior to their first meeting. There, they practice thing, such as maneuvering around steps or curbs with wheelchairs and walkers. “If we hadn’t received that training, then I wouldn’t know how to handle that kind of situation properly,” says Prochista Sarshar. In order to get a sense for the perspective older people have, companions obtain an opportunity to step into an old age simulation suit, which allows them to experience the typical restrictions that older people live with. “That was a really great experience,” underscores Prochista Sarshar, “suddenly you realize how older people feel in situations that may appear really easy to us.” 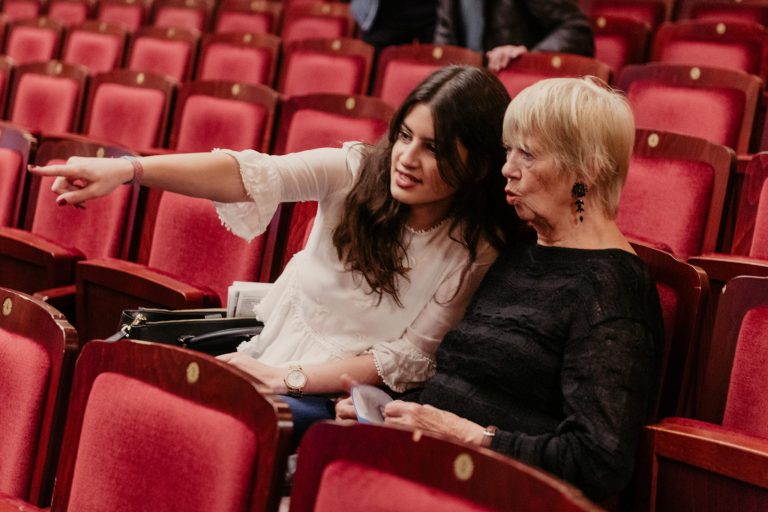 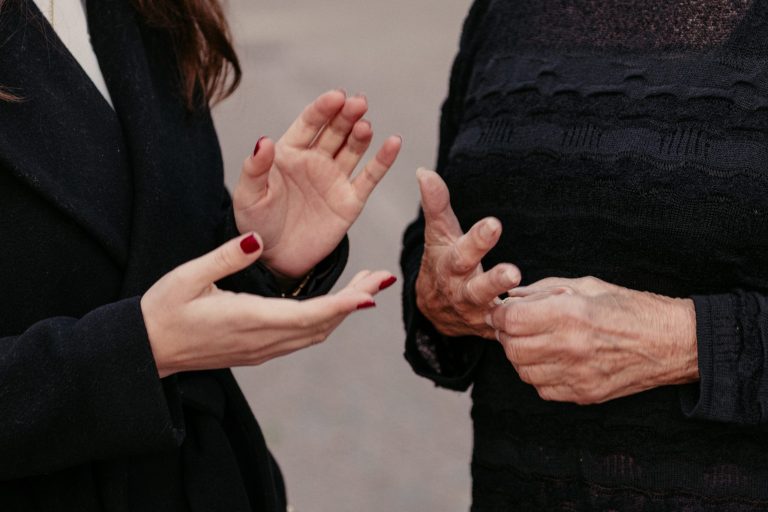 Jutta Conrad and Prochista Sarshar meet for the first time over tea in a café across from the performance venue. They agreed to the meeting point in advance over e-mail. Both seem somewhat reserved, yet curious and open to getting to know the other. Prior to today’s concert, a big surprise awaits – the two of them have the once-in-a-lifetime chance to personally meet the internationally renowned musician, José González. Senior citizen Conrad is somewhat nervous but as soon as she has shaken the singer’s hand, she comes into bloom and talks with him – in fluent English. On this evening, singer-songwriter José González will be accompanied by The String Theory, an experimental orchestra. Classical music is combined with contemporary folk-pop – both of the concert-goers enjoy the show.

“To see how the activity makes the other person happy also makes you happy yourself.” 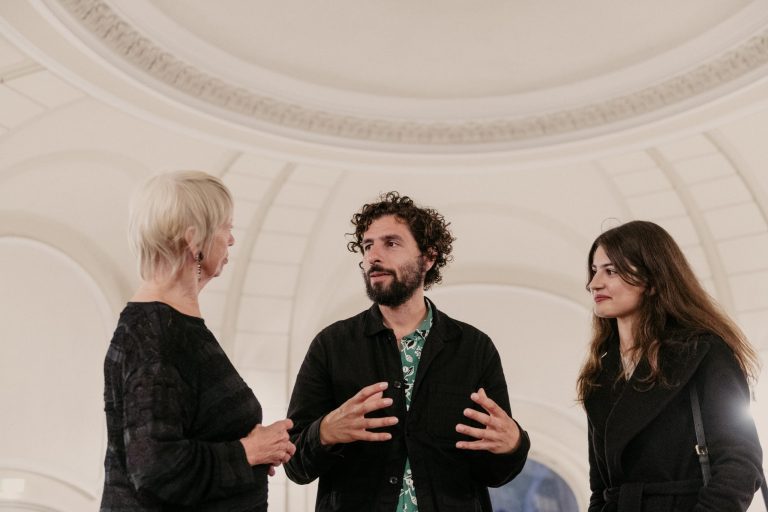 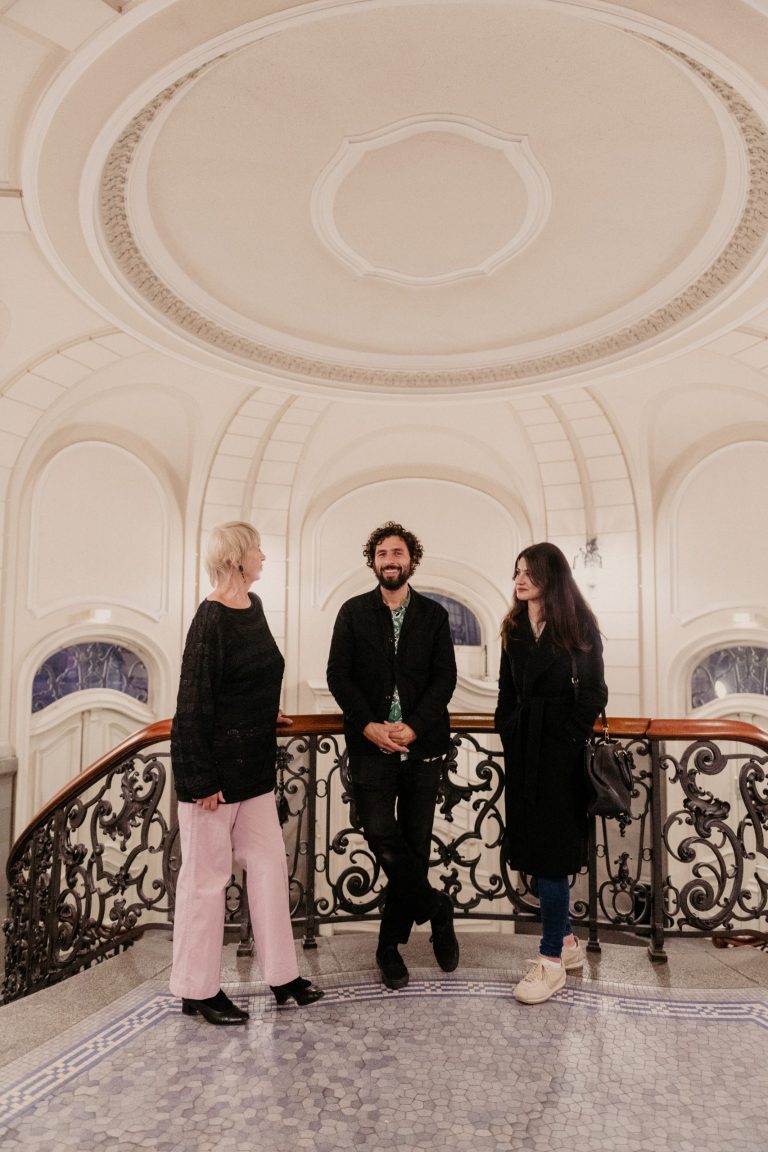 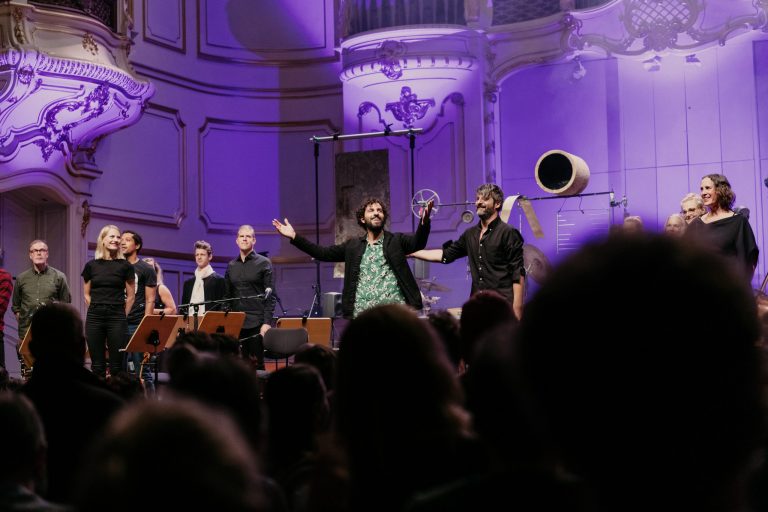 After nearly two hours in the neo-baroque concert hall, an impressive light show, intense sounds, and thunderous applause, Jutta Conrad and Prochista Sarshar depart from their seats invigorated. Sometimes, more can evolve out of a mutual visit to a cultural event. Sarshar recounts, “Last time when I was out with an elderly lady, we got along so well that we still stay in contact. I think it’s great when something like that grows out of it. “To see how the activity makes the other person happy also makes you happy yourself.”

“I wanted to leverage the unifying power of art and culture and facilitate social and cultural inclusion for people who have financial limitations.”

KulturistenHoch2 was founded by Christine Worch and is a project of Stiftung Generationen-Zusammenhalt (Foundation Generational Solidarity).  After nearly 30 years in the private industry, she decided to exclusively deploy her know-how in the future for social projects involving aging, dementia, or social deprivation. While carrying out her work with the association KulturLeben Hamburg e.V., she noticed that older people often had to waive the free tickets to cultural events because they lived alone, often with a physical disability, isolated in their apartments and no longer having anyone to accompany them. That is how the idea for KulturistenHoch2 was born. “I wanted to leverage the unifying power of art and culture and facilitate social and cultural inclusion for people who have financial limitations. Here, culture serves as the opportunity for initiating contact, encounters, and exchange between generations and to solidify solidarity in the city’s neighborhoods. The social engagement teaches young people to assume responsibility in society,” explains Christine Worch.

With the support of the award from The Power of the Arts, Worch is looking to work toward scaling her project on a national level. She and her team are currently working on a handbook to that end.