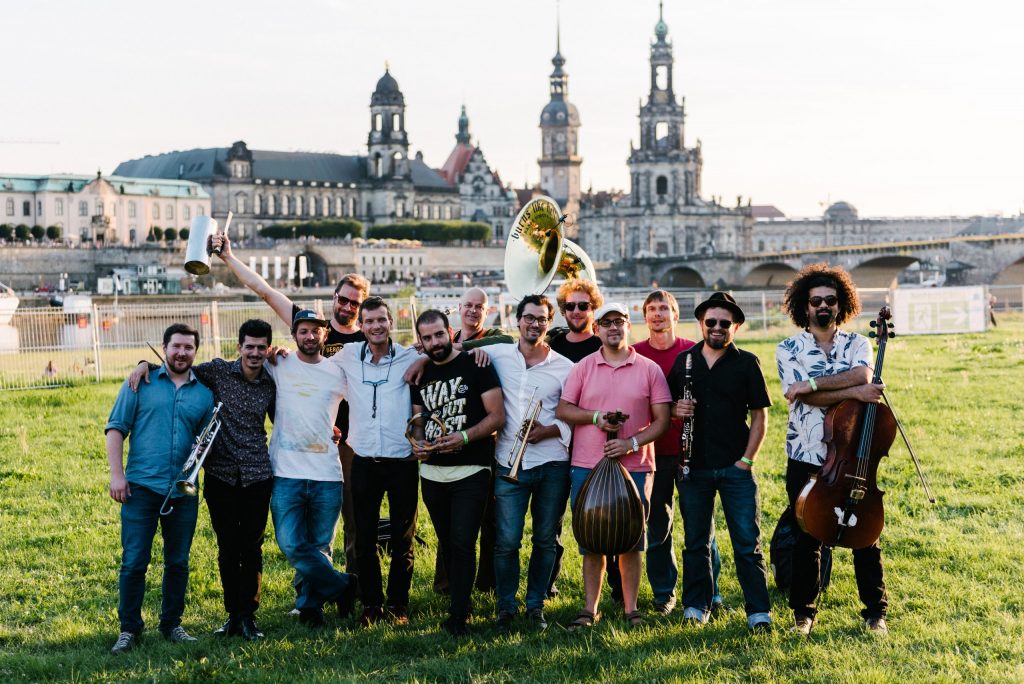 Banda Internationale from Dresden has some 20 members who represent an association of musicians with and without a background as refugees. What unites them is the desire to change something about the current situation in Saxony, and particularly in Dresden: The goal is to tear down prejudices and replace them with bridges spanning cultures, religions, and ethnicities. They are looking to re-interpret the music of the homeland, irrespective of where that homeland is or was. They aim to open hearts, break down prejudices and resentments, and contribute to understanding among Saxons, Germans, and Europeans both old and new.

The band has gained a reputation for itself through political engagement against xenophobia and racism, in particular standing up against the PEGIDA movement and the strong presence it has in Dresden.

We find ourselves in Dresden, along the banks of the Elbe River on a Monday in August. It is early evening, on the southern bank one finds the Church of Our Lady and the Academy of Fine Arts Dresden in the low sun. Across on the other side of the Elbe River, there is a large outdoor stage directly next to the water. Considering a band is supposed to perform here later, there is surprisingly little frenzy. The mood: tense anticipation.

Two days prior, German singer Roland Kaiser performed here. The schedule for his concert is still hanging on the fridges in the backstage area. He and Banda Internationale, who are playing on the stage along the Elbe this evening, are worlds apart in more than just a musical sense.

Banda Internationale is a grouping of musicians with and without backgrounds as refugees. What unites them is the desire to change something about the current conditions in Saxony, and especially in Dresden: The goal is to tear down prejudices and replace them with the much-hailed bridges between cultures, religions, and ethnicities. A further aim is to render integration successful and create a more open Saxony – achieving all of that through music alone. 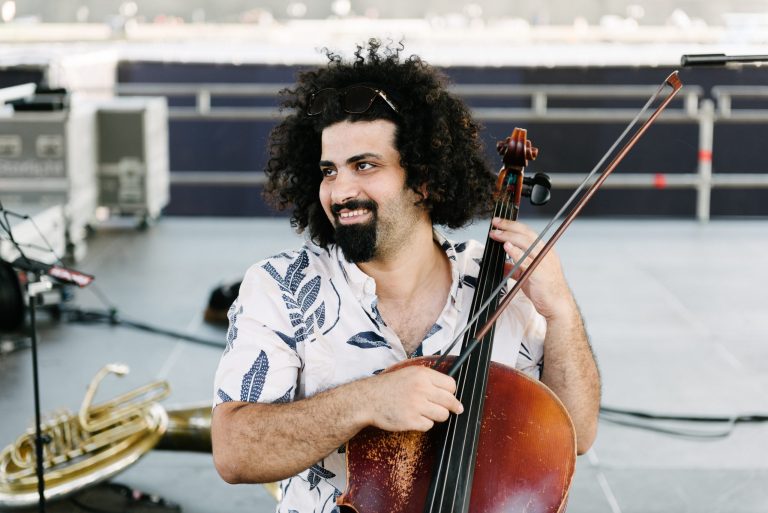 During the sound check along the Elbe, one hears a blend of jazz, funk, and melodies and harmonies unknown for Western ears. Akram Younus Ramadhan Al-Siraj came to Dresden two years ago from Iraq and is the sole cellist in a band otherwise heavy with wind instruments. When one asks him how he would describe his musical style, he shows a wide grin and says: “Actually cool.” He gets more specific later on. “We unite different musical disciplines like jazz and Balkan music and traditional pieces from our homelands. We always try to render these wonderfully beautiful melodies even more beautiful.” While Al-Siraj sits in the hot and stuffy backstage area, he talks about music that comes directly from his heart; his story, which he can narrate through music; the band, which is like family to him. They are grand words. The cellist is in a nearly provokingly good mood, and one believes what he says. 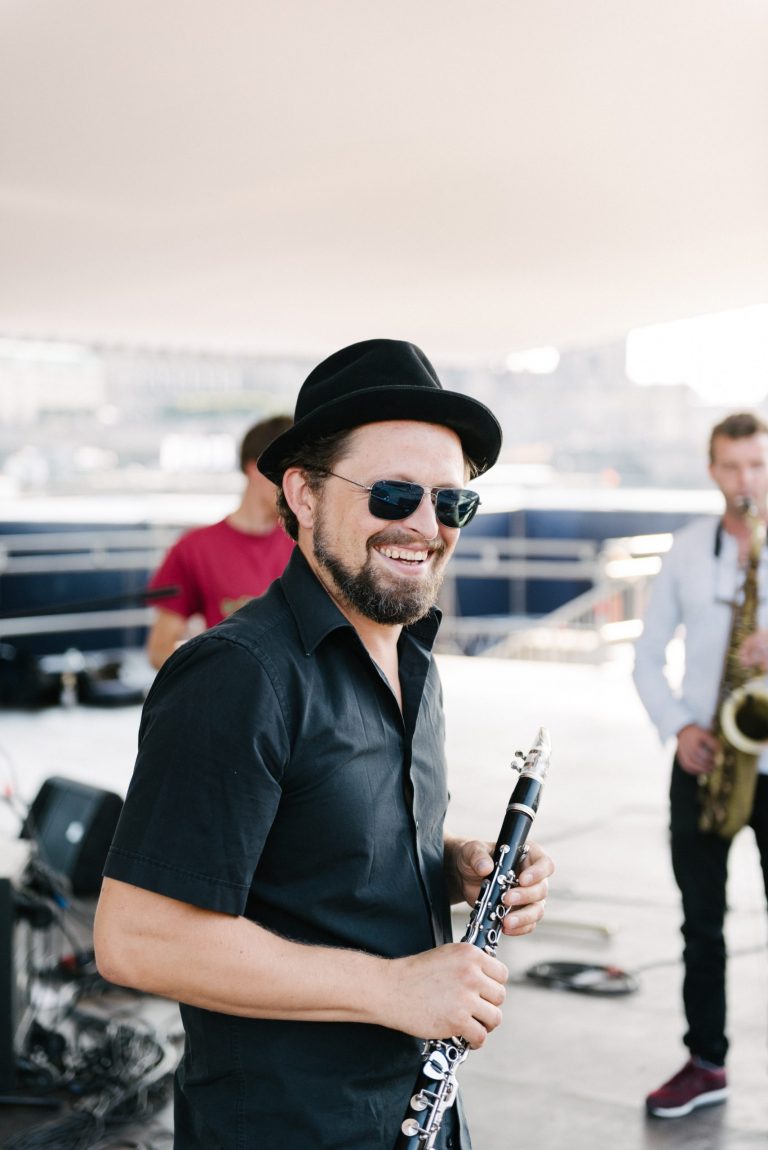 “Pegida has turned a lot of things upside down.”

If they absolutely wanted to establish a front man in Banda Internationale, the selection would likely fall upon Michal Tomaszewski. Born in Poland, he fled to Lower Saxony with his parents in 1989 and now works as an architect in Dresden. He believes “that you can move things with a wind band, too,” he says, while standing on the edge of the stage along the Elbe. Tomaszewski, who plays clarinet and smokes self-rolled cigarettes incessantly, does not shy away from confrontation with the adversaries the band has made for itself. To the contrary: Performances at protests against Pegida and in Freital, which is known all over Germany as a stronghold of xenophobia, are very important to him. “Pegida has turned a lot of things upside down. We were already a political band before, but since then have been even more clear in taking a stand.” 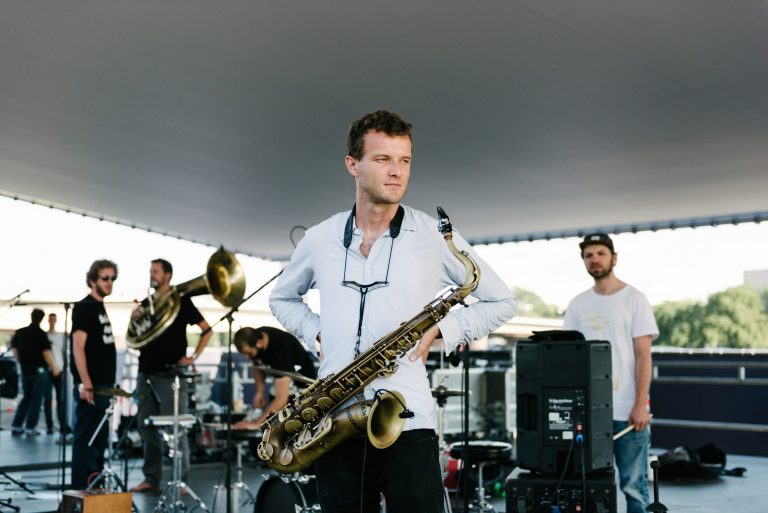 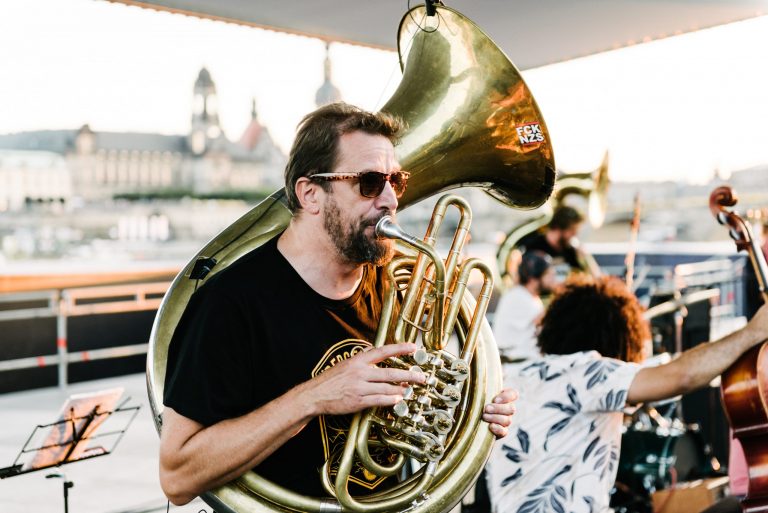 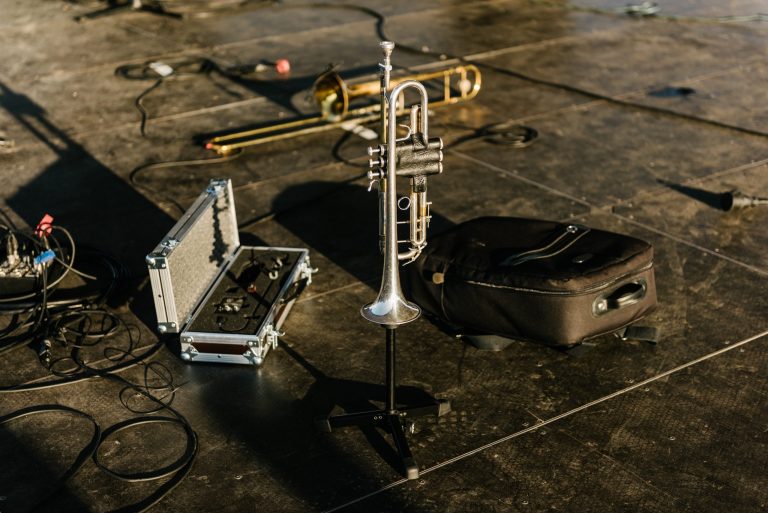 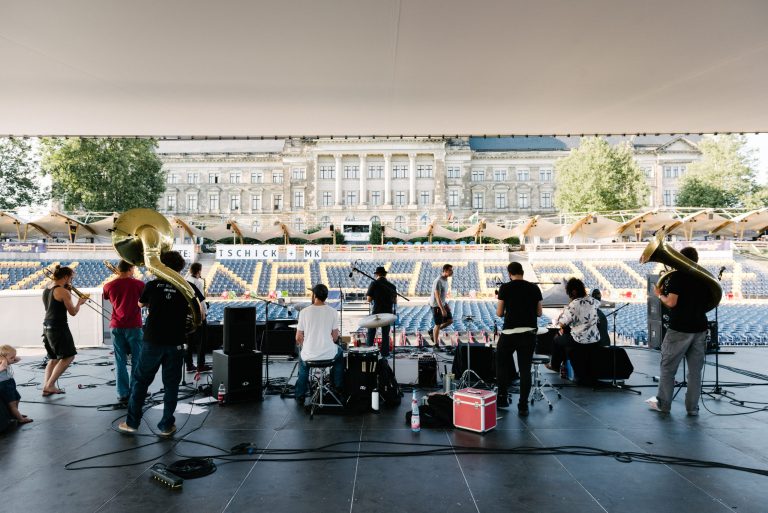 With the weekly parades of outraged citizens passing through Dresden, the band began to collaborate with the city’s big cultural institutions, such as theater, the Academy of Fine Arts, and museums to counteract xenophobia and those who oppose integration. Today, the band’s engagement is seen not only in the high number of performances at protests, at refugee housing sites, and in initial reception facilities, but also in the high number of visits to schools.

“One big concern in Saxony is that there is a high level of xenophobia among school children. Part of this is there is no history of migration here like there is in Western Germany,” according to Michal Tomaszewski. That is why the band’s musicians travel to schools, tell the students about their experiences as refugees, and perform concerts. Thabet Azzawi comes from Syria and plays oud, a string instrument with a long history and origins in Persia. He says: “One time we were at a school where the children had never seen a foreigner in their lives.” Often, the musicians impress through their mere presence. 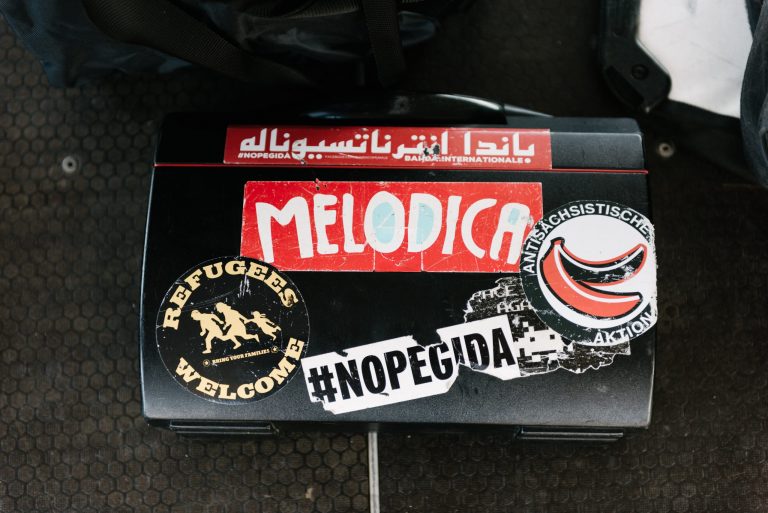 A city in flux

While the school visits are intended to tear down prejudices, the workshops at initial reception facilities and refugee residences for unaccompanied minor refugees help them to get a start in Dresden and the surrounding areas. Under the title The Kids Are Alright (trans note: sic.), the musicians rehearse pieces with them, simultaneously providing instruction. The band members quickly become role models and figures to identify with, as they themselves were new arrivals just a few years ago. The project is slated to continue in 2018. 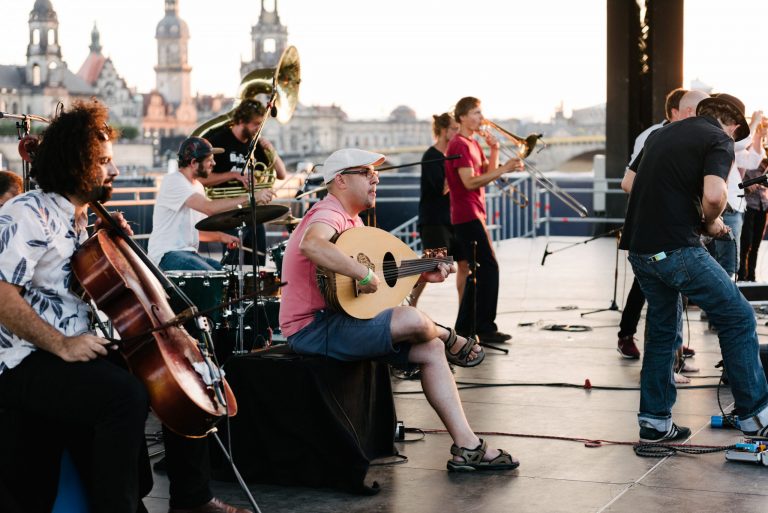 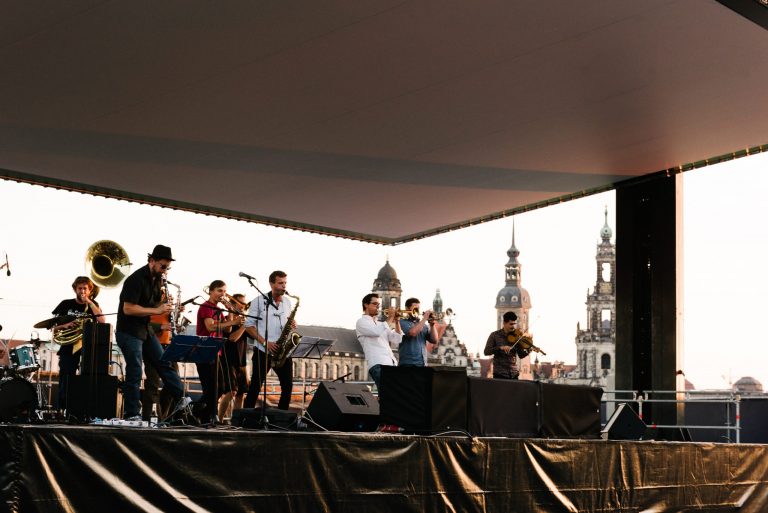 Everyone in the band is in agreement that Dresden has transformed over the past two years. “I’ve noticed that Pegida has become smaller. Today in Dresden, you see many people from other countries, nearly as many as in some cities in western Germany. Dresden has become an open city,” says Thabet Azzawi. Since the band plays for both Germans and immigrants, he notes it is only logical that they receive coverage in the media again and again as an example of successful integration.

Ultimately, it is less the countless media reports and much more the feeling of being able to change something that keeps the band together and motivates them. Performances for right-wing students in small rural schools are more important to them than a prestigious concert at the State Chancellery.

Still, the band does enjoy standing on the giant stage along the Elbe. For no one here can hear the Pegida protesters moving through the streets of Dresden a few kilometers away. Banda Internationale drowns them out effortlessly.

Our winners from last year, Banda Internationale, spoke with us about their work since receiving the award and the obligations of a cohesive society.

What’s next for you? What projects are coming up next?

Following a somewhat surprising, yet ultimately positive sponsor change, we will be continuing our project work with children and teenagers. In addition to the prize money from The Power of the Arts, we recently received funding confirmation from the State of Saxony, such that over the next two years we will be able to perform more than 40 workshops and a dozen concerts with Banda Internationale at schools and youth centers, as well as weekly rehearsals for unaccompanied refugee minors and instrumental instruction for nearly 20 children per week.

The principal objective continues to be the integration and equitable inclusion for teenagers with and without a migration background in Saxony. For us, this is fundamentally about portraying education and inclusion as positive categories in coexistence and our society, rendering them tangible in real life. Segregation and separation have to be identified as a process for which there is no room in a cohesive society.

We view integration to be a process for the whole of society that must call upon people with a migration background and the social majority alike to pursue active collaboration in shaping society. Accordingly, another one of the goals to our project for the next two years, House of Music, is to reinforce the social cohesion among young people in Saxony’s society. The funds from The Power of the Arts are being fully dedicated to that endeavor.

What wish were you able to fulfill with the award? How has your project changed because of it?

The award from The Power of the Arts not only provided us with encouragement to get involved in intercultural education and pedagogical work and made us more independent from institutional and state funding, it certainly also encouraged those we look to for support to continue sponsoring us.

Which of your co-participants has left the biggest impression on you?

That isn’t so easy for us to answer. We primarily spent the evening with the participants from the project label m, with whom exchanged addresses and actually planned to visit each other. That hasn’t happened yet, but we are confident we’ll remain in contact. The project Un-Label left a deep impression on us through its inclusive naturalness and levity, especially considering several of us deal with inclusion professionally on a daily basis. We also felt an artistic proximity to *foundationClass and the notion of first focusing on the inner values of a person rather than on origin or physical disability is probably what connects all of the nominated projects the best.

Why did you apply to The Power of the Arts? Why would you recommend to other initiatives that they do the same?

We occasionally apply for prizes and do so for a rather simple reason: unfortunately, the current media coverage is too often dominated by depressing, negative images and hate. This could give the New Right the opportunity to regain enough influence in Germany in order to shake up the current, fundamental consensus in civil society. We cannot allow this to take place and must not only contradict, but also get our own images, our own convictions, and our own stories out there. Social acknowledgment also represents an adjustment and anchoring of the moral corner stones – without wanting to seem pretentious here – shining the spotlight on positive stories of migrants, on positive energetic coexistence can only be in the interest of all who subscribe to democracy. To that end, unfortunately, we have to reconquer some of the imagery.