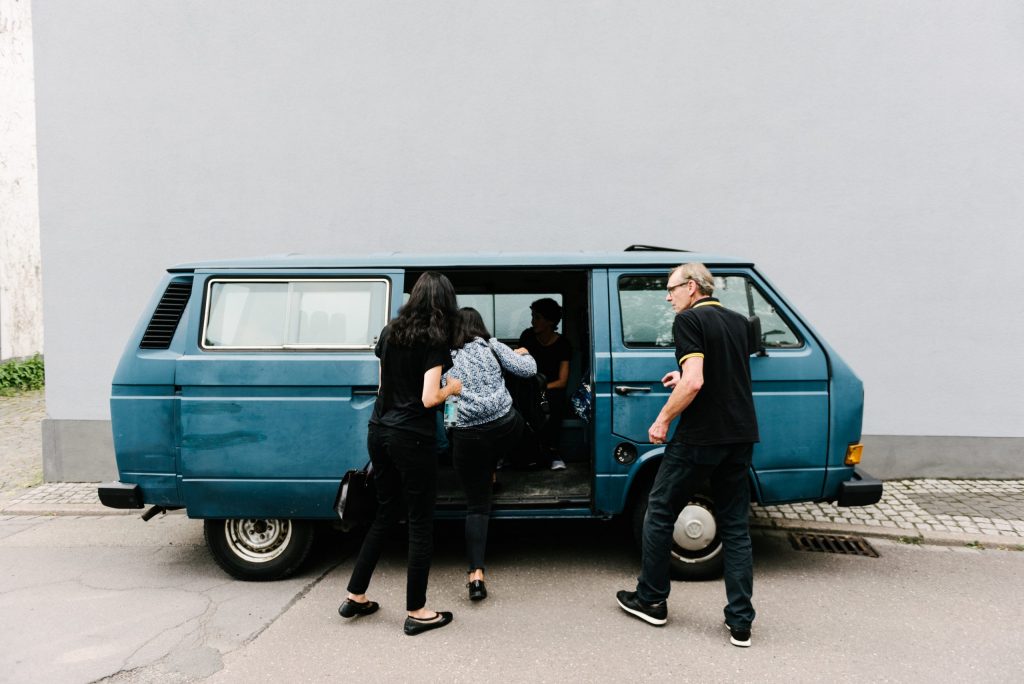 This non-profit association in Saarbrücken has been combining social work and art since 2009. It places emphasis on self-awareness and cultural integration. The association is concerned with natural artistic development, integration, and cultural exchange among youth and subcultures. Their team of musicians, artists, cameramen, and helpers organize workshops, courses, and events and produce films – with the goal of bringing young people who lack direction closer to music and spray-painting walls legally.

Report on Label M.
Graffiti instead of opera.

Sprayers, skaters, rappers: anyone setting out in search of representatives of youthful urban subcultures would hardly begin in Saarbrücken. So far, the city has not been known for its exports of music and art. And it will be part of pop-cultural debates only when it comes to pulling jokes about a small, supposedly trivial German state and its capital.

For all that, the assumption that this place has no flourishing youth scenes, aspiring artists, and enthusiastic musicians would be doing Saarbrücken an injustice. Indeed, the city close to the French border, with a population of 180,000, is full of them, also thanks to label m. 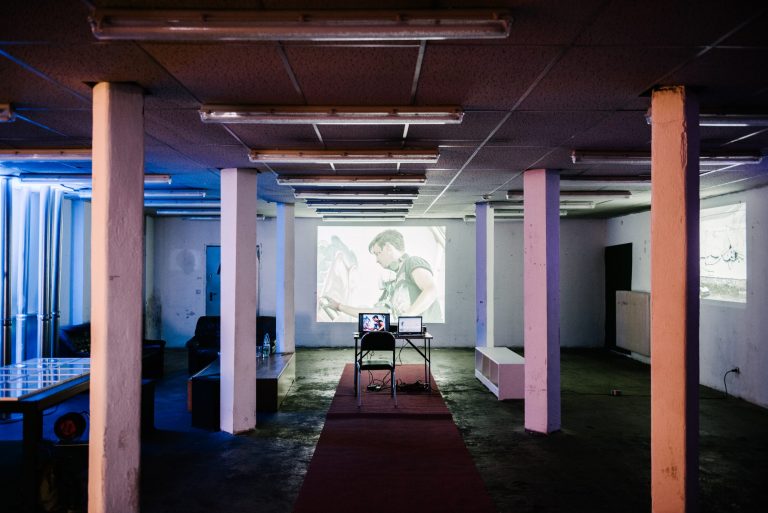 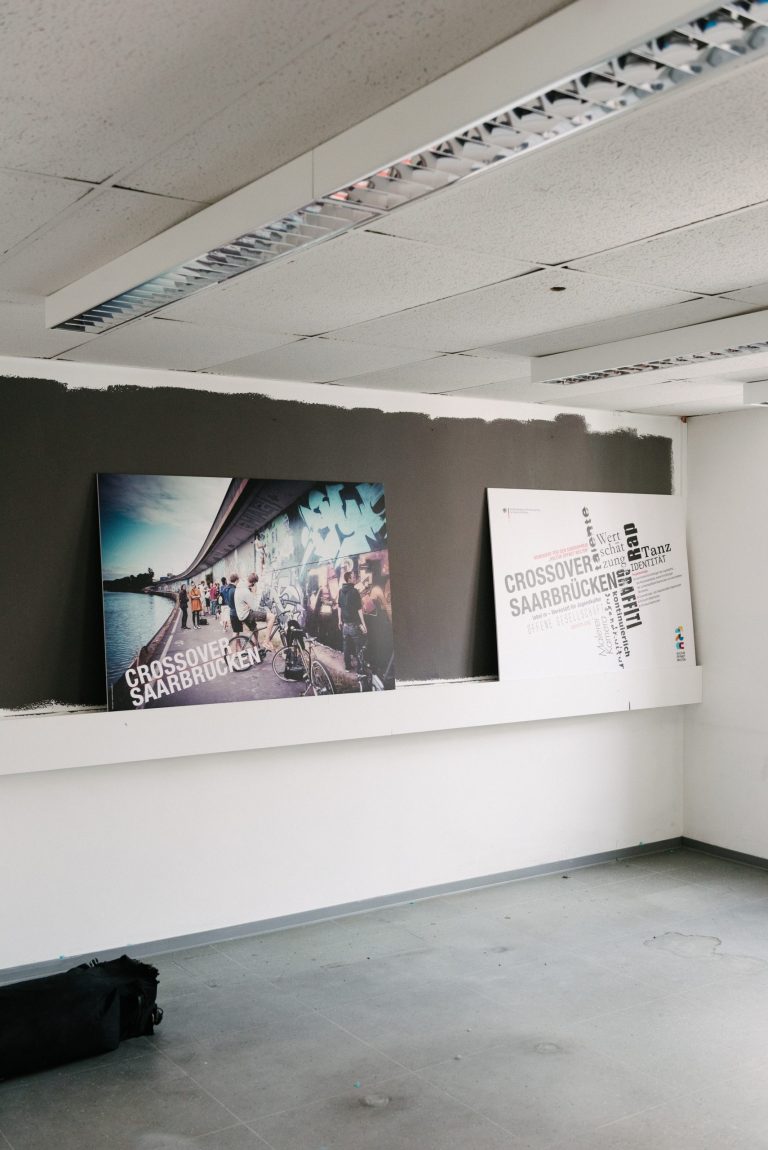 Since 2009, this nonprofit organization has brought welfare work and art together in Saarbrücken. “Everybody is always asking: how can we reach young people? Well, it’s quite simple. You will reach them by simply accepting their culture, which is already there, and starting to work with it. This is what we’ve felt from the outset”, says Thomas Langhammer, who is sitting in a large downtown exhibition room, thus giving an apt outline of the basic idea. The association is all about natural artistic development, integration, and cultural interchange through youth scenes and subcultures. Artistic work is aimed at helping to disclose the strengths and weaknesses of everyone, and to work on them.

At the Garelly House – where label m now has an office, playing some of the exhibition rooms –, the great significance of the youth cultures for the association becomes rapidly apparent. There, the opening of an exhibition has been scheduled for this evening. The walls are already covered with silk-screen prints by street artists; skateboard videos are flickering across screens. In a side room, refrigerators are being filled with bottled beer. In this place, ‘exhibition’ invariably means ‘partying’ too. 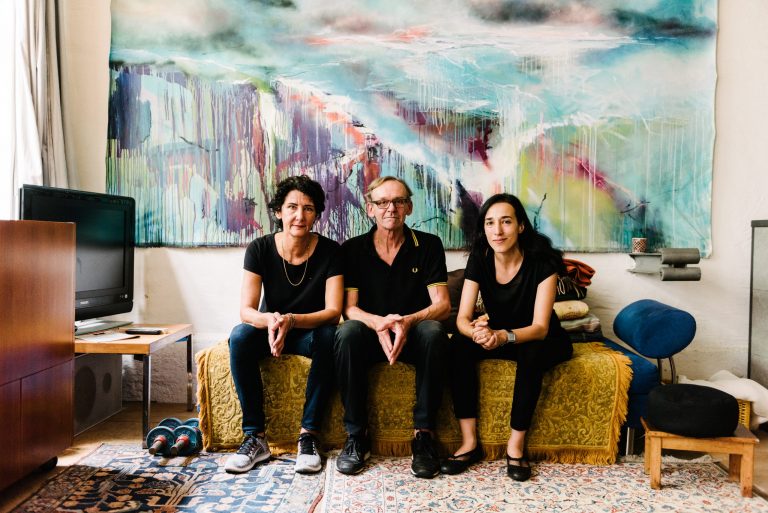 “Those wanting to join will be here. Troublemakers will leave.”

Primarily, however, this means work. Plenty of work. Thomas Langhammer manages label m jointly with his partner, the artist Gisela Zimmermann, and teacher-to-be Rûken Tosun. There are no employees on fixed-term contracts, and in addition to their work for the association, the three initiators all hold main occupations. With a team comprising musicians, artists, cameramen, and assistants, they organize workshops, courses, and events, and produce films – always with the objective to teach music to young people without prospects who are drifting, and to familiarize them with the idea of spraying onto ‘legal’ walls.

It all began in Malstatt, one of Saarbrücken’s problem districts. There, Zimmermann and Tosun got to know each other during their joint work at a youth center. At the beginning, almost all the young people who were using the offerings of label m had a migration background. Meanwhile, the group also includes all-German participants. No selection criteria apply: “Those wanting to join will be here. Troublemakers will leave”, says Langhammer about the low-threshold concept. 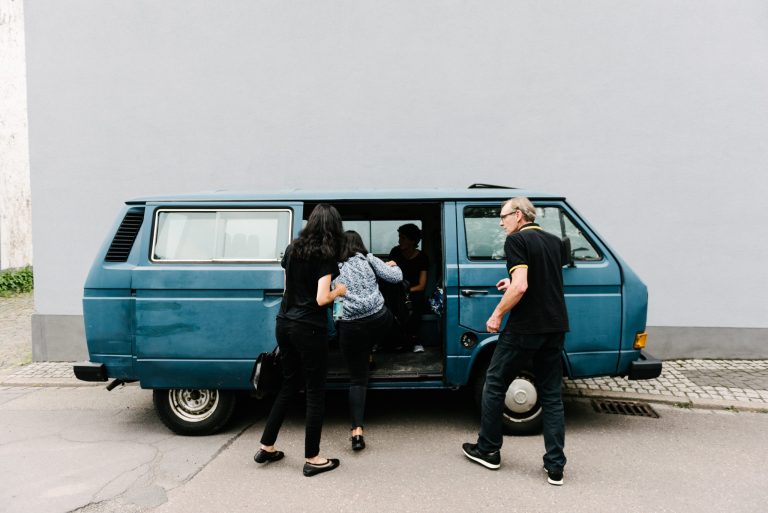 Before this evening’s exhibition, a rickety VW bus takes the visitors to the apartment of Langhammer and Zimmermann. Next to a backyard in Saarbrücken’s old city, the two live in bright rooms, with lots of art on the walls. The are works by Walter Benjamin and Gernot Böhme on the bookshelves. The apartment is the studio of Langhammer and Zimmermann, and the place where their social work originates.

For her large-format paintings stored and leaned against the walls in the apartment, Gisela Zimmermann uses spray cans time and again. “She buys her spray cans from the same stores as the young people with whom we work. They hold her in great esteem.” Rûken Tosun admires her colleague for her standing among the city’s sprayers. The scene is comprised almost exclusively of men. “The marking of walls does tend to be a male gesture, which is perhaps the reason”, says Langhammer. Moreover, advanced culture was being dominated by men, which would ultimately rub off on subcultures too.

On the other hand, most of the participants in offerings dealing in depth with certain subjects will be female. “A workshop on the concept of one’s ‘homeland’, for instance, was made up almost of girls only. Intellectual subject matters will make girls stay on.” 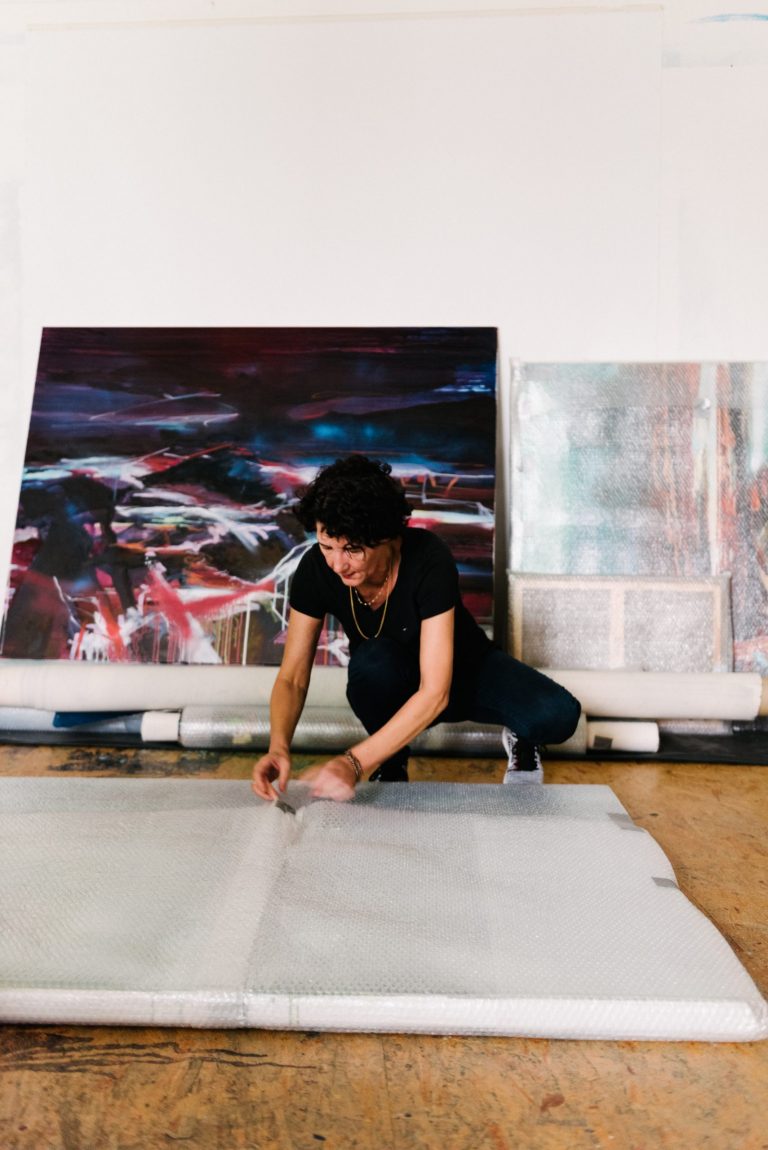 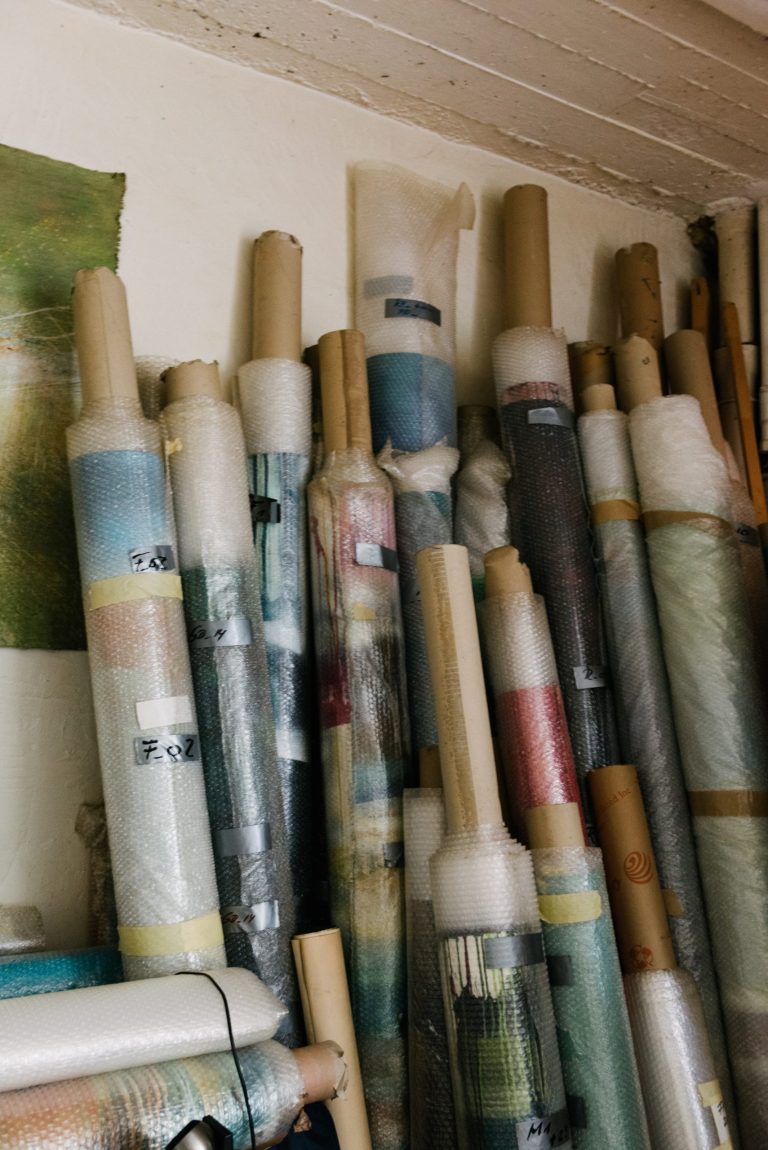 Discussions but no quarreling

‘Home’, or ‘homeland’, is one of the big subjects. The association will soon be showing its first full-length film of their own making, a documentation relating to this subject matter, in which people passing by are asked about their very personal concept of ‘homeland’. For the workshops and other offerings, it should be irrelevant where the young people come from, or what their ethnicity and religion may be. The only thing hoped for is the meeting of different influences and attitudes. Rûken Tosun says: “We seek to promote a culture of debate. We do not place under taboo any controversial topics of politics and society. Any kind of nonsensical talk during painting may offer a good opportunity to instigate a discussion.”

The fact that debate will not degenerate into quarreling is due to the relations between the youths and the association’s staff in charge, which have been built over years. They know and value one another and, in particular, will appreciate views and standpoints deviating from one’s own opinion. 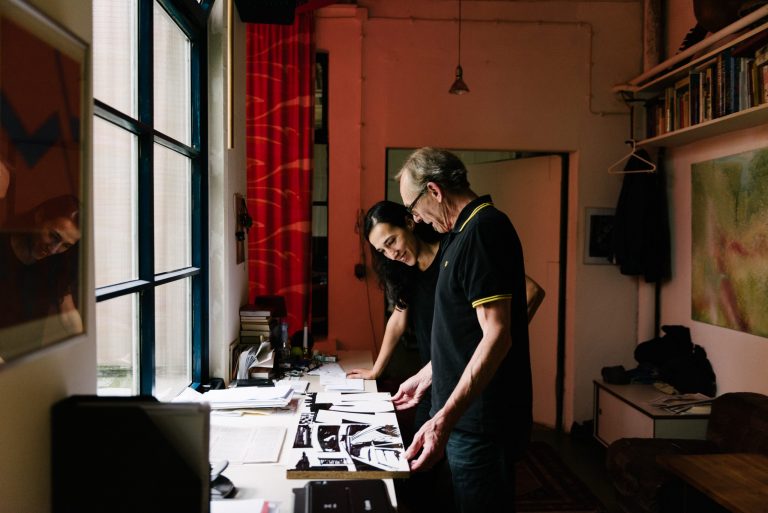 Having a cup of coffee is followed by a visit to the place that has so far only been talked about: The Wall, which is the name of the 1,800-square-meter area adjacent to the Saar river. The Wall is one of the country’s largest legal graffiti surfaces. It gets newly primed at regular intervals, whereupon artists from Germany, France, and Belgium will travel to Saarbrücken for a weekend to immortalize themselves on The Wall. This Friday, it’s their turn again. The small groups are still at work, building and getting prepared. A few hundred meters up the river, work is already being done under a bridge. This is where the young people from label m are allowed to do their spraying, to try themselves. Where they come from, who they are, what else they may do – all that is of no concern here. “We want to support young people personally, but we also seek to integrate them culturally”, says Tosun, and this appears to be working well on that completely unglamorous wall behind a thermal power station. A 16-year-old is working on her first graffiti, with Langhammer and Zimmermann sitting over a glass of beer with a few boys. The atmosphere is relaxed and familiar. 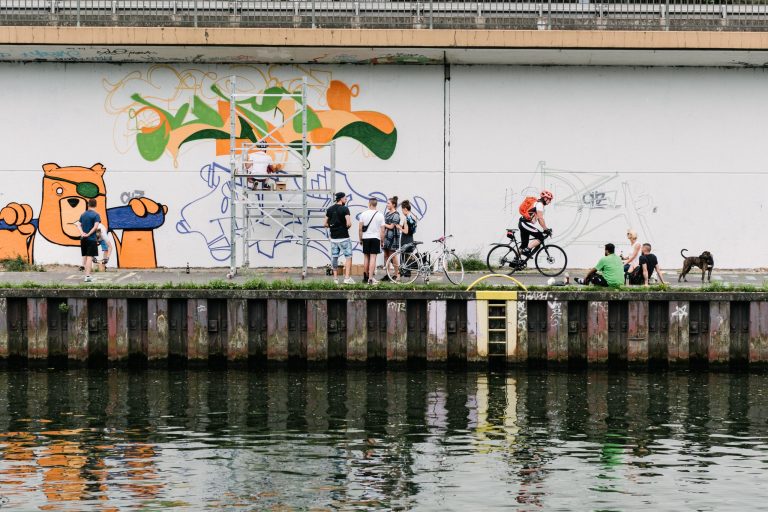 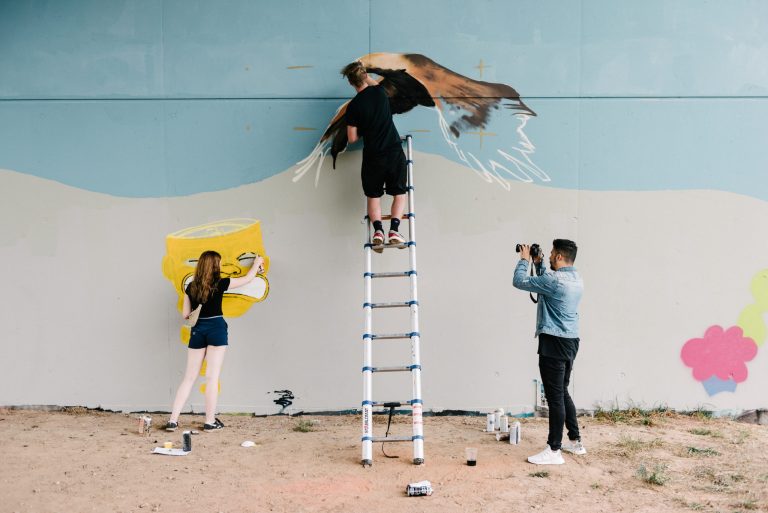 “The young people who feel like visiting have been coming back time and again for eight years now. We meanwhile know these people well and have a close personal relationship with them.” In Saarbrücken, according to Thomas Langhammer, bringing people together is easier than it is in other cities.

“It’s a good thing for the Saarland to be that small.” That’s the reason for a plethora of Saarland-related jokes; in the end, it turns into a locational advantage.

In an interview, label m talks to us about what unites all of the winners at The Power of the Arts and what makes the award so important for multiculturalism in Germany.

What’s next for you? What projects are coming up next?

Over the past months, we were able to move into a new space with youth culture projects in another district, and to raise more awareness for ourselves. In music, dance, painting, and interior design workshops, we are now working to prepare the GARELLY SCENE Festival, which all of us will be jointly hosting from 31 August to 9 September. Thanks to additional funding commitments that have come in, we’ll be able to continue the workshops beyond the project period while also developing new formats in collaboration with interested young people.

Which of your co-participants has left the biggest impression on you?

The common ground quickly became apparent during the presentation of the participants, who really are quite different, at the award ceremony in Berlin: The goal of promoting social inclusion for everyone via art and culture, with the means for doing so being as diverse as the target groups themselves. These similarities became immediately tangible in the warm-hearted way all of the participants interacted with one another. It was very impressive overall.

What wish were you able to fulfill with the award? How has your project changed because of it?

The first wish was met, specifically to be in a position to continue running our label m project at all – a workshop for youth culture. Being able to do so is not usually a given. We are able to bring life into new spaces and work in a more professional, thorough, and sustainable manner. We hope that this boost will lead to an ongoing, solid foundation for the future. This funding permits us to process the full diversity of youth-specific cultures in parallel workshops. Most young people are active in multiple fields. We are excited about the upcoming festival and how the groups complement each other synergistically.

Why did you apply to The Power of the Arts? Why would you recommend to other initiatives that they do the same?

The way the call for applications for The Power of the Arts is formulated aligns to a high degree with the concept label m has been implementing since 2009: To use art to foster identity and identification as a foundation for cultural integration and social inclusion. It’s worthwhile to muster the courage to look for sponsoring opportunities, even if it is the highest-endowed award in Germany for cultural inclusion. We put in the effort, and were successful.